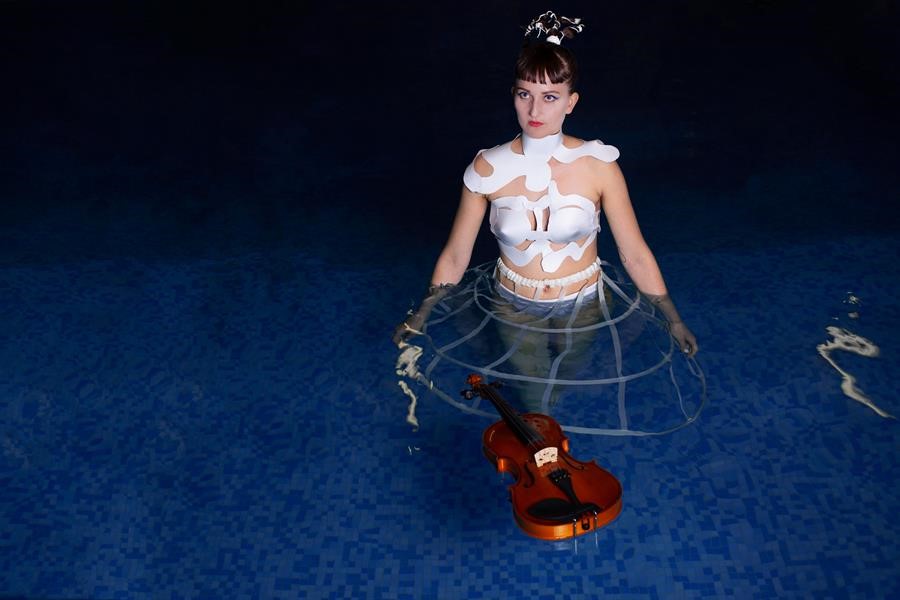 German violinist, singer and composer Johanna Burnheart has shared a new video for her latest single ‘Silence Is Golden’. The track is taken from her much anticipated debut album ‘Burnheart’, which is due out 30th October via Ropeadope Records.

Speaking about the track and video, Johanna says, “The melody of this track appeared to me while cycling to my primary school teaching job. The metre of this melody proved to be almost like a game – which is fitting as the song reminds me of some sort of nursery rhyme accompanied with a clapping game. I incorporated some of this imagery in the video in the form of each member of my band clapping on the wall with the sequence I developed. It is also a portrayal of the lockdown at that point.

The other scenes in the video were artistically directed by Sorcha Kennedy who tied in the imagery with the artwork she made for this single specifically. The cage-style top I’m wearing was handmade by her for the original photoshoot of the album artwork. We played with mirrors, layers and blend modes to achieve the video in this form and the cage really elevates the images in my opinion.

My love for golden things is portrayed in the mirrored scene I dubbed “sheep dreams” during my editing process. It leads the video into darker imagery which includes clay figures that are featured on my album cover and a seemingly under-water room where I play and sing my solo.

‘Inspired by a diverse spectrum of teachers and influences’

I like to use my voice as an effect rather than the focal point and I find that blending it with the violin sometimes creates a synth-like sound.”

The violin is still a rare instrument in the jazz world, so Johanna Burnheart finds herself within a niche of a niche. Her playing does not reflect the traditional approach to jazz violin made famous by players such as Stéphane Grapelli or Stuff Smith but is rather inspired by the horn giants of the modal jazz genre.

Much of her life has been spent absorbed in the Berlin sound of the techno & house scene resulting in this certain influence permeating her compositions. Johanna’s work exists at the point where modal jazz and leftfield electronica meet. This is an ever developing venture as technology allows the acoustic sound of the violin to come alive electronically without compromises.

Inspired by a diverse spectrum of teachers and influences, Johanna’s education has been multifaceted. From early beginnings at a music school in Northern Germany to becoming a “Specialist Musician” at the prestigious Wells Cathedral School, Johanna went on to participate in summer jazz programmes at Berklee College of Music in Boston, Dublin and the Guildhall School of Music and Drama in London. This total immersion into jazz at this point provided the impetus for her to change genres definitively.

Upon this new path, Johanna spent two years in Berlin studying with some of Germany’s most renowned jazz musicians, with monthly trips to Paris for lessons with Didier Lockwood at his jazz school. Her love for the Berlin clubs and the music they represent was manifested during this time, forming the foundation of her current musical style.

In 2013, she enrolled at the Guildhall School of Music and Drama in London as the first jazz violin undergraduate student of the school. The timing was perfect; jazz in London was just on the verge of exploding into the kaleidoscopic scene that it is today.

Notable performances since her return to the UK were the Women’s Day concert with Tomorrow’s Warriors “Nu Civilisation Orchestra” debuting Yazz Ahmed’s Polyhymnia suite at Queen Elizabeth Hall in 2015, playing support for Pharaoh Sanders at Ronnie Scott’s with Rosie Turton in 2018 and a tribute show to the Blue Note Label at Queen Elizabeth Hall for the EFG London Jazz Festival 2019 in collaboration with Total Refreshment Centre.

As well as being a regular member of Rosie Turton’s band, Johanna joined the up and coming London Garage Orchestra in 2019 and toured UK festivals with both projects that year including Glastonbury Festival, Boomtown Fair, Love Supreme, Jazz Re:Fest and Brainchild.

Since forming her own band “Burnheart” at the end of 2018, Johanna has performed at jazz re:freshed, Spice of Life, Jazz in the Round and the Jazz Café with this project; the latter being an event presented by jazz re:freshed called “The Sounds of 2020”.

The “Burnheart” debut album will be released on Ropeadope Records in October 2020.