Pour Yourself A Glass – Tenille Townes 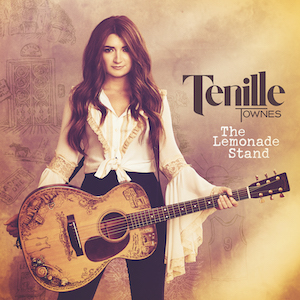 Stream/purchase HERE, and check out the official video for new single “Come As You Are”, recorded remotely with her band during lockdown: https://tt.lnk.to/CAYAvid.

In celebration of the release, the two-time ACM Award nominee will also chat with fans on her YouTube page here at 6pm BST / 12pm CT before the premiere of the official “When I Meet My Maker” music video.

In the ten years since Townes started the fundraiser, “Big Hearts For Big Kids” has raised over $1.9 million for Sunrise House—a local youth shelter in Townes’ hometown of Grande Prairie, Alberta Canada. Proceeds from this year’s event will once again benefit Sunrise House as well as Girl Scouts of Middle Tennessee’s Troop 6000—an initiative that supports girls without permanent housing. Donations to both organisations can be made via bigheartsforbigkids.com.

“To say Townes has hit the expectations some would have given her with this would be an understatement – this is comfortably an album of the year contender.”—Maverick Magazine (10/10)

“With a curious and probing spirit, Townes infuses a distinct sense of wonderment into the stunning album that reflects her equally beautiful soul.”—Sounds Like Nashville

“there’s nothing more integral to Townes’ first full-length career venture than this sense of community…continues the tradition of country music as a storytelling medium.”—Forbes

Of the album, Townes reflects, “The Lemonade Stand is a collection of songs that mean so much to me and are the way I see the world in this season of my life right now. I want this music to be like a gathering place, where people can come and be filled up. I hope this record reminds people of who they are, that they are not alone, and reminds them of their dreams. This record is the dream that I had when I was a seven-year-old kid singing along in the backseat of the car. She would really be freaking out right now.”

The release of The Lemonade Stand adds to a breakout series of years for Townes, who is nominated for two awards at the 55th ACM Awards: New Female Artist of the Year and Musical Event of the Year for “Fooled Around and Fell in Love” with Miranda Lambert, Maren Morris, Ashley McBryde, Caylee Hammack and Elle King. Townes is also nominated for two 2020 JUNO Awards (Breakthrough Artist of the Year and Songwriter of the Year) and recently won four awards at the 2019 Canadian Country Music Awards: Female Artist of the Year, Single of the Year (“Somebody’s Daughter”), Anthem Entertainment Songwriter of the Year and Video of the Year (“Somebody’s Daughter”). Moreover, she is a MusicRow 2020 Next Big Thing Artist, an iHeartCountry’s “On The Verge” artist and has been included in Amazon Music’s “2019 Artists To Watch,” CMT’s “Next Women of Country,” iHeart Radio’s “Artists To Watch in 2019,” “The Bobby Bones Show’s” “Class of 2019,” CMT’s “Listen Up” and the inaugural class of “Opry NextStage.” Additionally, Townes is featured in the Country Music Hall of Fame & Museum’s new American Currents: State of the Music exhibit.