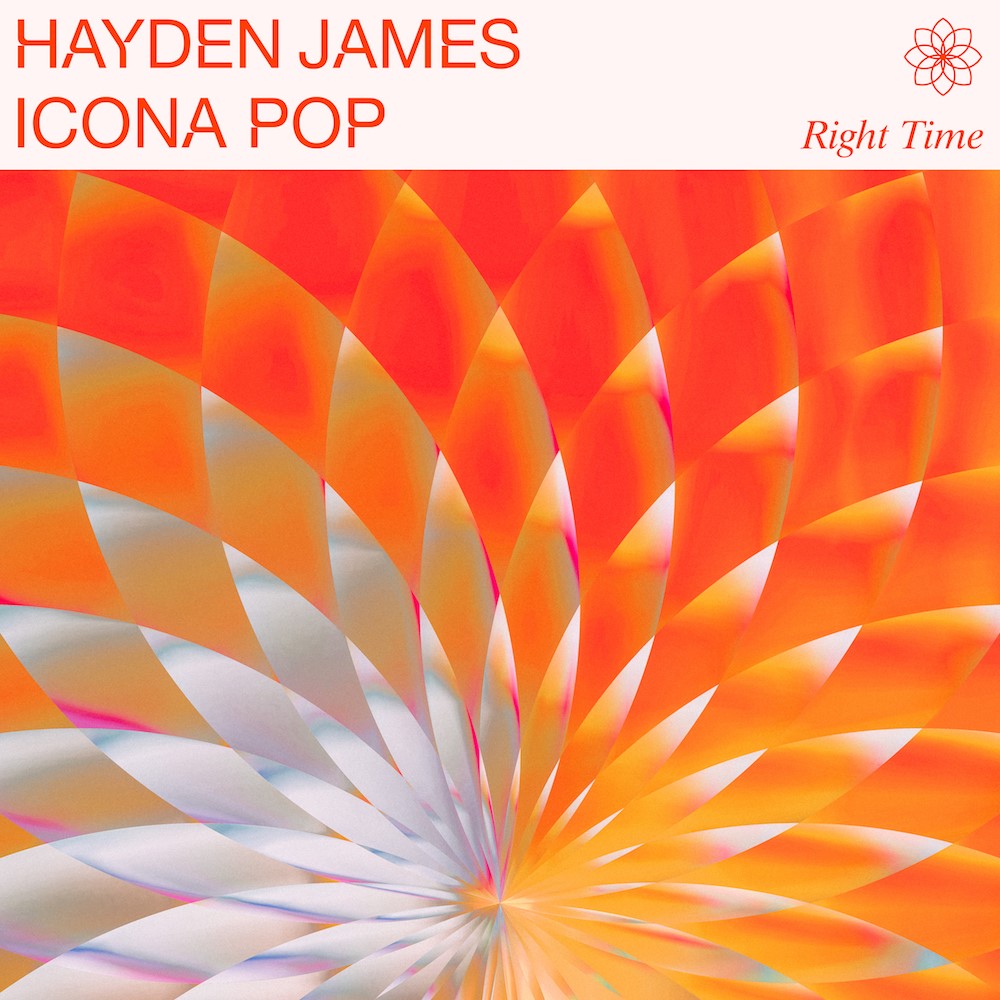 The first taste of new music in 2020, “Right Time” firmly cements James’ status as one of Australia’s most influential contemporaries, taking on a new level of high-energy electronic music in collaboration with the globally adored pop heavyweights.

“Right Time” premiered on Zane Lowe’s Beats 1 show on Apple Music and delivers a welcomed level of optimistic energy at a time where the world needs it most. Combined with Icona Pop’s infectious pop-infused style, the track transports the floor-filler vibes straight to the home; a positive reminder of life beyond the realms of isolation.

Accompanied with an equally relevant music video, Icona Pop’s Caroline Hjelt and Aino Jawo take the party to the confines of their own home. Cinematically crafting a level of energy synonymous with a heaving club, the clip sees the duo frenetically bounce from room to room, overcome with the energy of Hayden’s production.

Hayden says of the single: “Feels good to release this energetic and positive song especially in these crazy times. I had so much fun working with Icona Pop and the video we shot captures the raw energy of the girls and the song. It’s one of my favorites!” Icona Pop share the sentiment, revealing, “we’re so excited to release Right Time with Hayden. We hope that we can share a little light and positivity and get everyone raving at home!”

Following six years of delivering internationally acclaimed dance-floor anthems, Hayden James’ 2019 debut album Between Us was the well-awaited gift for his legion of fans. The past year also saw Hayden carry out his largest international tour, debuting a brand new live show and playing to multiple sold-out venues across Australia, America and Europe. The multi-platinum artist is poised to take on Coachella in October, followed by a headline US tour later in the year. Until then, Hayden is showing his appreciation to his fans by streaming live sets from his Sydney backyard at 12pm every Saturday, which you can tune into via his YouTube channel.

Meanwhile, Swedish chart-topping duo Icona Pop continue to slay since their 2013 full-length debut, This Is… Icona Pop, which garnered critical acclaim from the likes of Pitchfork and Rolling Stone as the duo performed on The Tonight Show Starring JimmyFallon, The Today Show, Good Morning America, and America’s Got Talent in addition to featuring on the iconic HBO series Girls and a popular Saturday Night Live sketch. They canvased the globe on sold out tours with Miley Cyrus, Katy Perry, and One Direction and joined Tiësto for the banger “Let’s Go” in 2014. Along the way, the duo has performed alongside everyone from Avicii to The Chainsmokers as well as gracing the stages of Ultra,Tomorrowland, Mark Ronson’s Club Heartbreak, and more. Since then, they have consistently filled the gap in music when it comes to upbeat, carefree, quality dance-pop.

Last year, the girls DJ’d across Europe, Asia and North America as well as released a string of bangers including their Yves V and Afrojack  collaboration for “We Got That Cool.”

In addition, Icona Pop continued their message of inclusivity, self-acceptance and positivity on the road for their WorldPride tour, culminating with a show-stopping performance at Stockholm Pride that included a special appearance from Sporty Spice herself, Melanie C.

“Right Time” is out everywhere now.