Toying With The Figures – CRADLE OF FILTH 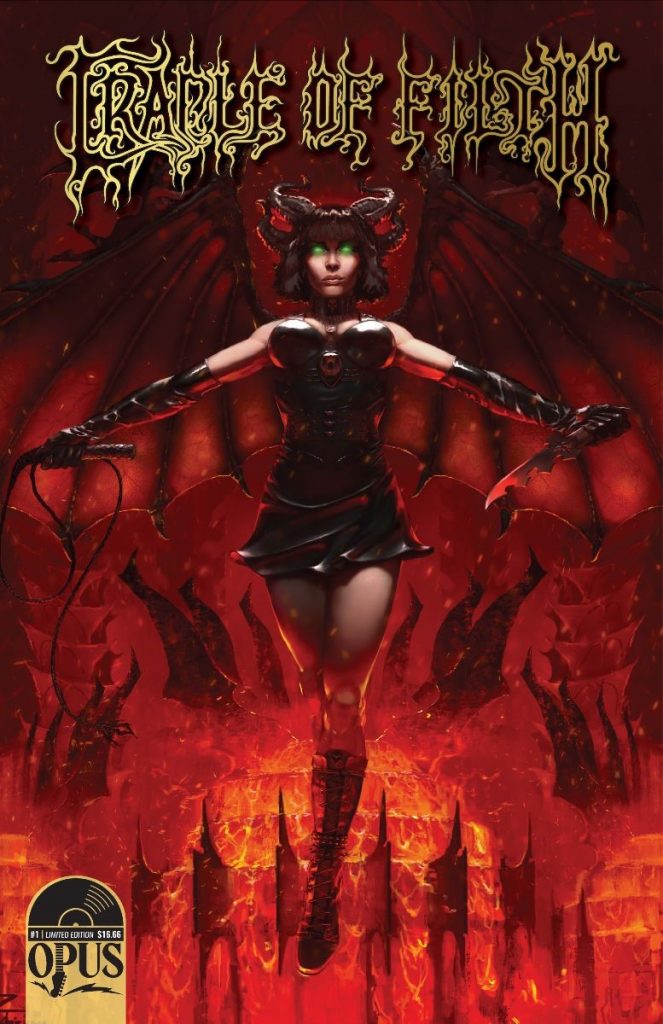 In the ruined halls of the Maledictus Athenaeum lie occult histories, sealed records, and cursed artifacts – this unholy archive explores the far corners of Cradle Of Filth’s musical legacy, a vast universe of Ageless Vampires, Mythical Creatures and Vengeful Gods. The Countess, The Huntress, Lilith, The Manticore, and many more, will be revisited in stories from an all-star roster of comics talent from the pages of Heavy Metal Magazine and beyond.

Maledictus Athenaeum begins as a 5-issue series. The first print edition of each issue will be released as a prestige format limited edition collectible comic book, featuring cardstock covers, specialty foil treatments, glossy pages, and individual numbering. Each first printing will be limited to 2500 copies at $16.66, and available to order from https://incendium.online/collections/cradle. The first issue is available to order now and ships May 2021.

’Cradle Of Filth’s collaboration with Incendium for the forthcoming comic series and action figures provides an incredible opportunity for fans to indulge and explore the mythologies and murk at the heart of the band’s lyrical compositions,” says Dani Filth.

“As an avid collector of Horror figures for decades now – citing the enclosing walls and shelves of my home crammed with toys and memorabilia as an example – I was only too eager to embrace this emphatic union with a company that is as excited about bringing our brand of lascivious Gothic darkness to glorious undeath as we are.”

Incendium CEO Llexi Leon adds, “Dani has created such a rich mythology across Cradle Of Filth’s discography and we’re thrilled to explore those dark fantasy worlds with our Maledictus Athenaeum anthology, an ever growing gothic library that’s sure to enthrall readers with an irresistible blend of horror, romance, mystery, and mayhem – featuring incredible visuals to inspire all manner of toys and collectibles across our lines.”

The cursed tales of Maledictus Athenaeum will extend beyond the printed page into toys and collectibles. Dani Filth and the iconic Succubus of Cradle Of Filth’s 2001 album Bitter Suites to Succubi make up Wave 1 of the CRADLE OF FILTH action figure range, also available to pre-order for $29.95 each from https://incendium.online/collections/cradle, Shipping June 2021

Filth adds, “To begin with are figures of ‘yours ghoulie’ Dani Filth resplendent in my onstage battle outfit; accompanied to war by the cruel, domineering Succubus from the Bitter Suites To Succubi album cover art, who is explored further in the first of many comic book adaptations to be unleashed in Maledictus Athenaeum. Both figures come delivered with classic action figure aplomb, whilst the comic book art is both visceral and evocative and is totally stunning.

Naturally we cannot wait for fans and collectors alike to get their claws on these unique, exquisite treasures and given the depth of CRADLE OF FILTH’s extensive discography and with a wealth of dark occultisms to draw upon – having tackled the morbid and sordid tales of Elizabeth Bathory, Gilles de Rais, Lucifer and Lilith as full-blown concept albums already- our collaboration with Incendium promises to be a marriage forged in Hell that prospers for aeons…” 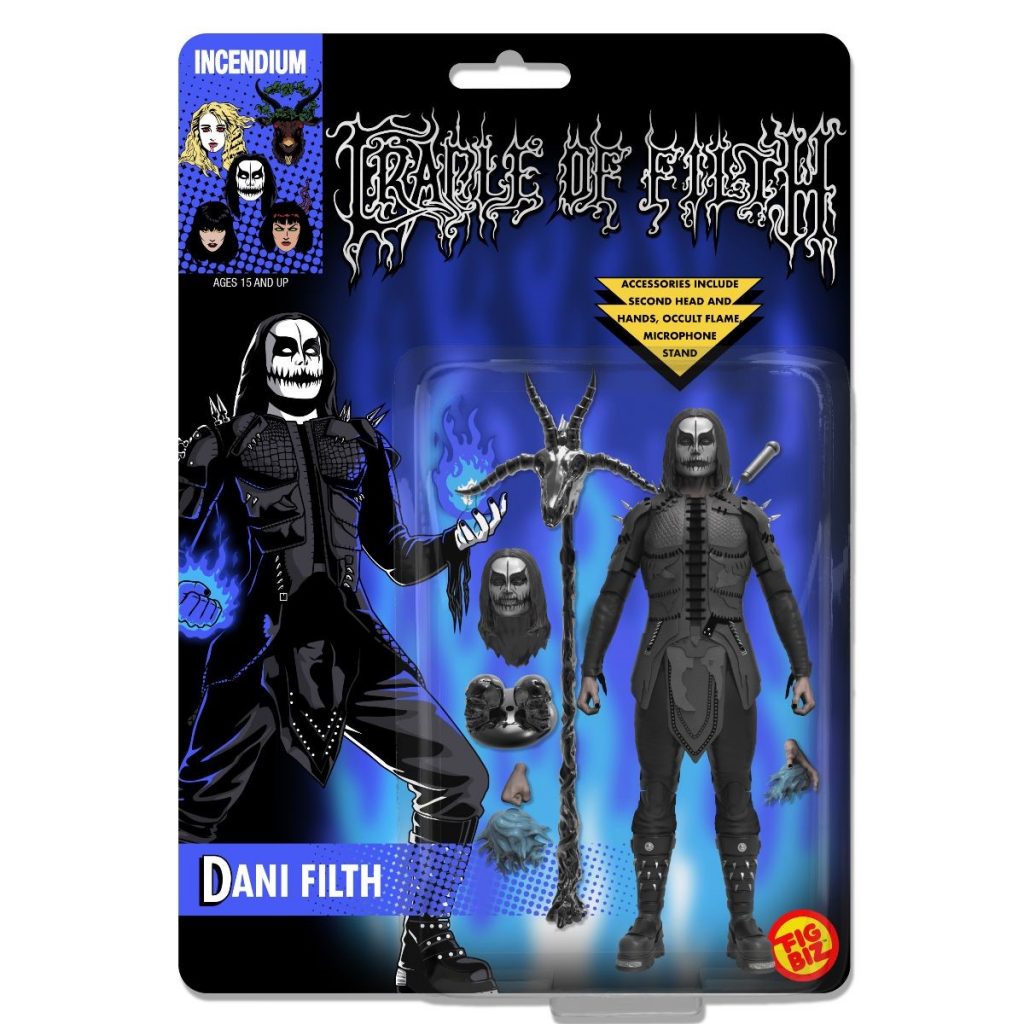 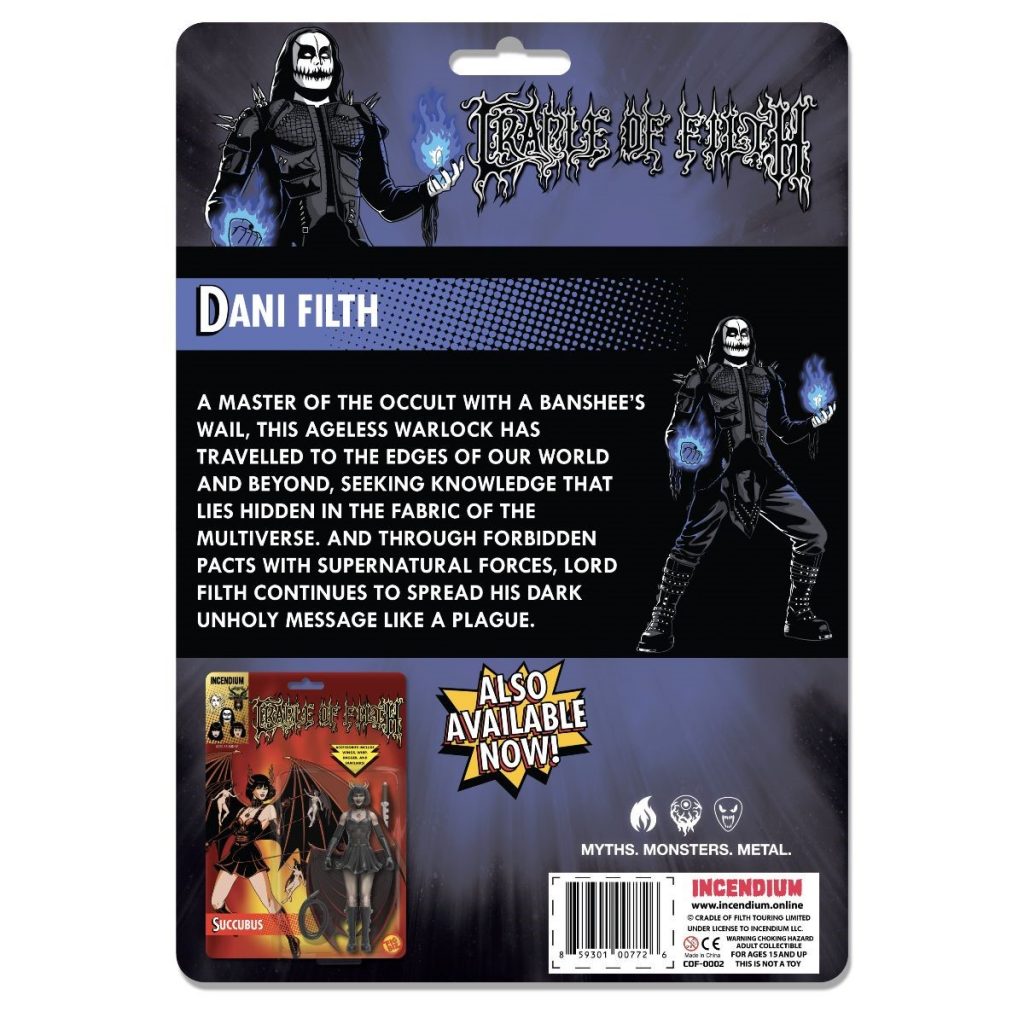 Belched from Hell’s depths into the rustic charms of the Witch County, Suffolk, thirty long and disturbing years ago, Cradle Of Filth are undisputed giants of the heavy metal realm. Imperious purveyors of a perennially unique strain of dark, dastardly and willfully extreme metal, with deep roots in the worlds of gothic horror and occult curiosity, the band led by Dani Filth has weathered three decades of tumult and trial, earning a formidable reputation as both a singular creative force and one of the most riotously entertaining live bands the metal world has ever produced.

From primitive early works like 1992 debut The Principle Of Evil Made Flesh to more expansive and theatrical classics like Cruelty And The Beast and Midian, Cradle Of Filth defied trends and constructed their own idiosyncratic world of foul grandeur, becoming one of the UK’s most notable metal bands in the process. Since then, they have traversed the world countless times, hoovering up plaudits and praise from an ever-expanding international fan base. Resolutely prolific, the band’s catalogue has grown in depth and stature all the while, irrespective of line-up changes or the whims of the faithful.