TLC ANNOUNCE THEIR RETURN TO LONDON WITH THE 25TH ANNIVERSARY OF THE CULTURE-SHIFTING AND SEMINAL ALBUM, CRAZYSEXYCOOL

London, UK (Friday 15 November 2019) — One of the greatest legacies in music history can be summed up by just three letters —TLC. Today TLC, on the twenty-fifth anniversary of the culture-shifting and seminal album CrazySexCool announce their return to the U.K. with a performance at London’s O2 Shepherd’s Bush Empire on Monday 29 June 2020.

Tickets go on sale 10am on Wednesday 20 November 2019 at LiveNation.co.uk

TLC, those characters merely hint at the talent of Tionne “T-Boz” Watkins, Rozonda “Chilli” Thomas, and the late Lisa “Left Eye” Lopes, but they immediately evoke an unparalleled journey nonetheless. That journey encompasses immortal anthems such as “Waterfalls,” “Creep,” “No Scrubs,” and “Unpretty,” to name a few, as well as sales of 70 million records worldwide, four GRAMMY® Awards, two RIAA diamond-certified albums among a total of four multiplatinum albums, ten Top 10 singles, and four Number 1 singles. The U.K. performance celebrates the incredible twenty-year milestone since their debut headline ‘FanMail’ Tour. 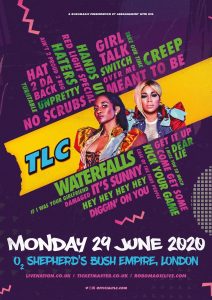 T-Boz and Chilli are bringing their highly anticipated show to London next summer in June 2020, after recently embarking on the “Whole Lotta Hits Tour” co-headlining with Nelly and supported by Flo Rida across North America. This unmissable return to the stage for fans will bring the sass and attitude that is synonymous with one of the most iconic girl groups to grace the earth.

There’s no doubt the undisputed “best-selling American girl-group of all-time” continue to captivate global audiences, most recently with their first album in fifteen years “TLC”. TLC of course return to form, picking up exactly where they left off just sharper, smarter, sassier, and even a little sexier than before, all while keeping the inimitable chemistry that simultaneously drove the twelve-track album straight to the #1 spot on the Billboard Top 100 Chart.

Fans can expect an incredible, non-stop party with hit after hit all night long.