Metal In The Sun – BEHEMOTH Confirmed For VAGOS METAL FEST 2020

Joining the Line-Up with TESTAMENT, HARAKIRI FOR THE SKY, ASPHYX + TROLLFEST, with many more names to be announced soon!

Portugal’s VAGOS METAL FEST has announced one of their headlining acts for a blasphemous summer of 2020, and confirmed Black Metal legends BEHEMOTH! Over the course of the last 28 years, BEHEMOTH have pushed the boundaries of death and black metal and heresy alike. While anti-Christian sentiment might seem like stale bread where most metal bands are concerned, for BEHEMOTH such ideas represent a very real threat to their physical freedom: Time and again, the government of their native Poland has charged them with various “crimes”. Mastermind Nergal and his bandmates — Orion, Inferno and Seth — have channeled all their anger and creative spirit into the passion of a distinctive sound, which influenced entire generations from all over the globe since decades. VAGOS METAL FEST is beyond proud to welcome the iconic band to their eclectic line-up in 2020, that already consists of high class names such as TESTAMENT, HARAKIRI FOR THE SKY, ASPHYX and TROLLFEST, with many more to be announced in the time ahead! 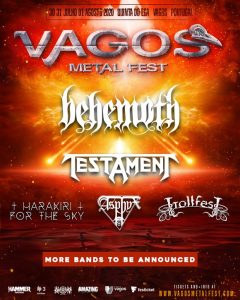 The 5th edition of VAGOS METAL FEST will be taking place between July 30th – August 1st 2020 in Vagos close to Porto, weekend passes are now available at THIS LOCATION! Start your holiday plans and join an ultimate, unforgettable metal trip under the sun of Portugal!