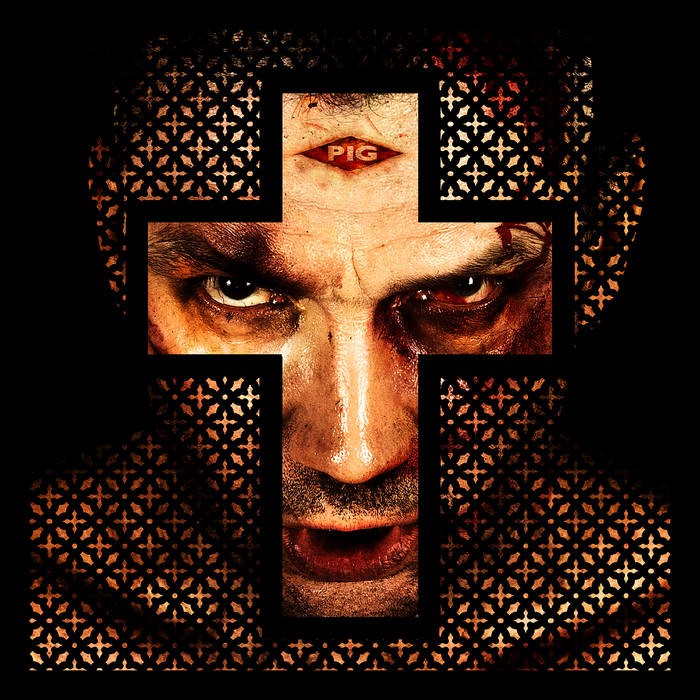 Raymond Watts aka PIG began his musical crusade in a Berlin basement in the shadow of the Wall back in the mid-1980’s.

Perhaps it was the terror and turmoil that  lends a certain sense of menace to the trademark decadence of his group’s sound. When the Wall fell, our salacious saviour set out into the desert on a journey that has spawned countless albums and projects….not only PIG, but some of KMFDM’s finest material and numerous other collaborations that have included scoring for Alexander McQueen shows, as well as installations and exhibitions.

Our sacred saint of all seven sins has now delivered a new divine declaration in the form of ‘Pain is God’. Fourteen tracks of swine and swagger, it is an exegesis of excess – glitches and guitars, allure and libido, danceable decadence – and the weaponised word of the Lord of Lard, here to save your skin from the wages of sin.

A single from the album entitled ‘Rock N Roll Refugee’ is out now. A delicious taste of electronic rock, Watts describes it as “the demon seed of glam and electronica stirred to an apotheosis of ejaculating guitars and lamenting vocals. A song that’s loose enough for your vices and tight enough for your virtues.” The hook heavy song features backing vocals from Michelle Martinez to add an extra touch of soul, and also sees Watts reunite with guitarist Steve White on record for the first time since PIG released albums via Nothing Records and Wax Trax! in the 1990’s.

A video for ‘Rock N Roll Refugee’ (directed by E Gabriel Edvy) is a decadent dive into Pop art influences, but can be seen as more of a nod to the Fluxus movement and the likes of Nam June Paik or George Maciunas rather than the mainstream Warhol-ian aspects of the genre. The song and video interplay as a homage to Intermedia, filtered through the mind of the Swine.