From The Heart – Rebecca Jayne 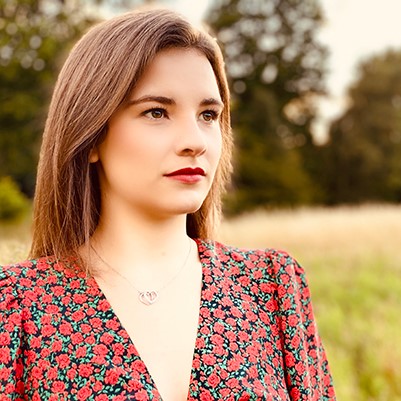 Rebecca Jayne first picked up a guitar aged 9 in defiance of her cousins who told her that “guitars are only for boys”.

Led by her strong will and determination, she soon learned the basics and began experimenting with melodies to write her first original songs.

She overcame stage fright to perform her first gig aged 14 and has since played live shows and festivals across the UK and US. Meanwhile her male cousins have all stopped playing guitar.

Rebecca approaches each new song as a blank canvas for honest storytelling and performs with such vehemence that is hard to come by. She released her second EP ‘Things I’ve Done’ in 2018. Recorded with Luke Batt (Katie Melua’s producer), the EP reached the top 10 in the Apple Music Country charts and received airplay on UK and US radio stations, as well as landing a number of spots with BBC Introducing. Rebecca has performed at CarFest (organised by Radio DJ Chris Evans), supported The Shires at South Hill Park Festival and has performed at a number of notable venues in Nashville including The Bluebird Cafe, Tootsies and Douglas Corner Cafe.

Fusing genres within her music, elements of Country, Folk, Pop and Americana can be identified in Rebecca’s sound. She cites Eva Cassidy as a huge influence on her musical style, admiring her ability to turn any song into something completely different and somehow even more beautiful. In recent years, Rebecca has also looked to Nashville writers, drawing influence from the likes of Shane McAnally, Lori McKenna and Natalie Hemby for songs that start with a writing concept, which is evident in her lyrics.

Rebecca wrote her new single ‘Heart of Mine’ during a trip to Nashville in 2019, as a follow up to a song called ‘I’m Not Saying I Don’t Love You’ on her previous EP. ‘I’m Not Saying I Don’t Love You’ documented her personal experience of somebody truly loving her but being unable to love them back in the same way. In contrast, ‘Heart of Mine’ sees Rebecca reimagine the same events from the other person’s perspective. A difficult song to write, ‘Heart of Mine’ is Rebecca’s apology and a vulnerable confession where she wishes she had handled things differently.

Rebecca recorded the single with Miles Myerscough-Harris (son of BBC Radio 2’s Bob Harris) at WholeHog Media Studios near Oxford and captured the magic of the song within the first couple of takes.

“It was an incredible experience to be recording in a room with such rich music history. I recorded with 4 incredible musicians – Will Looms on lead guitar and bass, Dan Bennett on banjo and backing vocals, Nick Cowan on piano and Ben Argyle on drums. Miles and the guys were an absolute dream to work with and I can’t wait to get back in the studio to work on some more music.” Having spent the last couple of years collaborating with some of the UK and Nashville’s top writers,  ‘Heart of Mine’ will be the first in a series of releases from Rebecca over the next year or so. With a growing fan base, and guitar in hand, this is just the beginning for Rebecca Jayne…