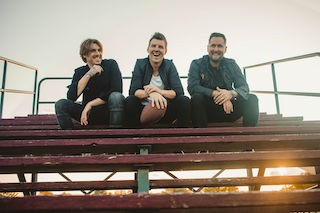 With bright harmonies and an uplifting melody, ‘All Who Wander’ is a reminder of all the beauty life has to offer.

Talking on the track and its lyrics the band says: “We’ve been sitting on ‘All Who Wonder’ for 5 years. It’s got such a beautiful and inspiring message, which is why we’ve always kept coming back to it. We knew now was the time to share this message with the world. Our hope is for anyone who hears our song can remember to have a little faith, and that better days are ahead.”

On the upcoming album, produced by Grammy nominated, Canadian producer Chris Baseford (Meghan Patrick, Avril Lavigne, Nickelback), PETRIC says, “Writing and recording Flashbacks took us from New York to LA, and all over Canada. By the time this album will be released, it will have been over 2 years in the making. This has been a journey, full of creation and discovery.”

The upcoming album will also include their early September release of ‘Déjà Vu’ which captured the attention of industry and fans with their high energy, rich vocals and alluring songwriting, as well as earlier single ‘Something To Do With You’ and radio hit ‘Single Problem’, which earned over one million streams and was the highest charting single by a Canadian independent artist in 2019 (peaking at #19).

Forming in 2015, PETRIC was discovered by JUNO Award winner Dallas Smith while showcasing at Country Music Week. Since then, Manitoba brothers Jason and Tom Petric and longtime friend Jordan Day have racked up over twelve million streams, 315K+ views on YouTube, three Top 20 singles on Canadian Country radio, and eight Manitoba Country Music Awards and have also been nominated Best New Artist at Country Music Week. The trio have also performed on some of Canadian’s biggest festival stages such as Boots & Hearts, Cavendish Beach Music Festival, the Calgary Stampede and the Big Valley Jamboree and received praises from country tastemakers such as The Boot, Complete Country and Top Country. With ‘All Who Wonder’ and their upcoming album ‘Flashbacks’ PETRIC ere on the verge to becoming one of Canada best country music exports.