Home On The Range – Devin Dawson 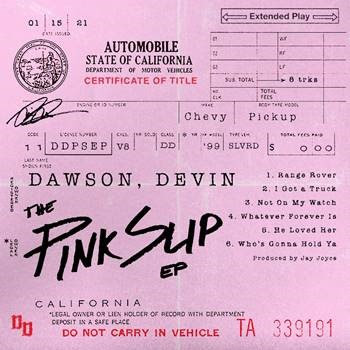 To celebrate the news, the acclaimed singer/songwriter also shared brand-new track “Range Rover” today (LISTEN HERE) from the six-song project. Named for the representation of optimistic freedom showcased in lead track “I Got a Truck,” The The Pink Slip EP finds Dawson building on the edgy confidence he pioneered with Dark Horse; however, where that set found him prowling the shadows of his own stormy soul, The Pink Slip punches through the clouds.

“I will always be a dark horse, but I have come a long way from the person I was, and I understand more of what it means to be an artist,” Dawson says. “There are definitely vibes on this EP that I wouldn’t peg for myself, but I like the unexpected nature of doing things that people don’t see coming. I try to reinvent the wheel every single day because I don’t think you ever really arrive, and you can never put your feet up. I want to be honest and vulnerable and take the next step, because I always want to be creating music that’s fresh and different from anything I’ve released before. I’m still in black and white, but the background is a little brighter.”

Dawson is currently featured on HARDY’s Top 10 single “One Beer” alongside Lauren Alaina, while “I Got A Truck” and “Range Rover” are the first new solo releases from the breakout star since the success of his GRAMMY-nominated, ACM and CMA Single of the Year, “God’s Country,” that he co-wrote for superstar Blake Shelton. The multi-week No. 1 also landed Dawson his first-ever ACM and CMA award nominations for Song of the Year, adding to his previously earned nods from the ACM, CMT Music, Radio Disney, BMI and MusicRow Awards. Called “one of country music’s most tender and articulate wordsmiths” by The Tennessean, the acclaimed singer/songwriter co-wrote every track on Dark Horse, which the Platinum-certified hit “All On Me.” Dawson has appeared on The Tonight Show Starring Jimmy Fallon, Late Night with Seth Meyers, ELLEN and TODAY in addition to receiving overwhelming critical praise from outlets such as HUFFPO, Esquire, Rolling Stone, Billboard, Entertainment Weekly, People, ELLE, AXS, HITS and more. The Nor-Cal native has also toured with major label artists including Maren Morris, Tim McGraw, Faith Hill and label-mates Brett Eldredge and Dan + Shay.

“Range Rover” is out to stream/download now.

The Pink Slip EP will be released on Warner/Atlantic on Jan 15th 2021.