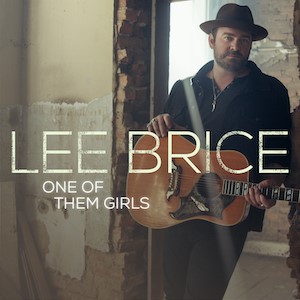 Country star Lee Brice takes his current radio single, “One Of Them Girls,” to the #1 spot on the US Billboard and Mediabase country airplay charts this week, making this Brice’s 8th #1 hit, third #1 in a row, and fastest-rising radio single to date.

Fresh off the announcement of his latest album, Hey World, and his #1 hit with Carly Pearce, “I Hope You’re Happy Now,” Brice’s current single “One Of Them Girls” rises to the top of the charts, claiming the #1 spot on both the Mediabase and Billboard charts this week.

“This song was embraced by both fans and radio from the get-go… it has flown,” says Brice. “We felt there was something special about it on the night we wrote it and to see how it has resonated is such a blessing and humbling. We are over the moon!”

Brice has 11 consecutive RIAA single certifications along with multiple gold and platinum albums, has taken 8 radio singles to number one, performed as part of the Library of Congress Gershwin Prize for Popular Song honouring Garth Brooks in 2020, and is just getting started.

His upcoming album, Hey World, is set to release via Curb Records on November 20th, 2020, with the title track, “I Hope You’re Happy Now,” and “One Of Them Girls” already available.