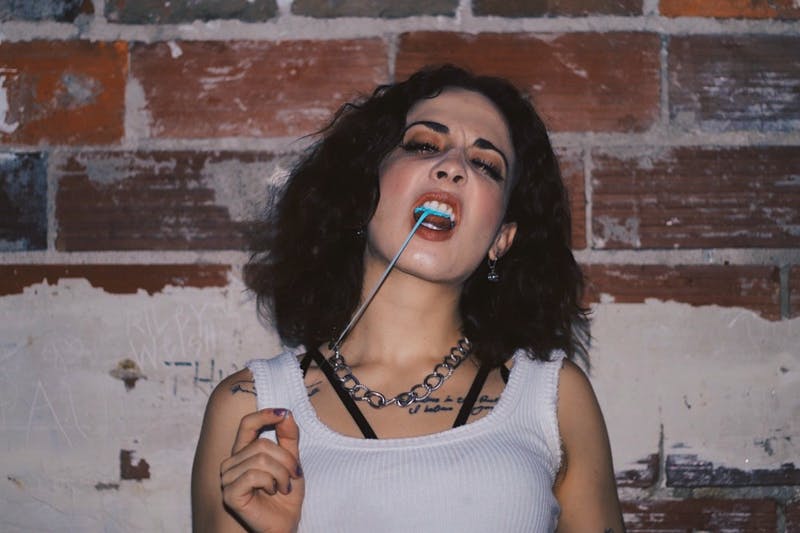 To create ANARCHY, Sizzy rented locations in Laurel Canyon and Downtown LA, where she lived, wrote, and recorded the album over the course of 8 days. By fully immersing herself in the world of ANARCHY, Sizzy was able to deliver her most confident and authentic work to date.

“you can be whoever the fuck you wanna be“

The record is full of bold and evocative surprises at every turn, juxtaposing slow burners like “Spill My Guts” with in-your-face anthems like “Straight To Mars (feat. Wes Period).” The previously released singles, “That Bitch,” “Smells Like Sex,” and “Rollerskating,” have all made a splash with fans and tastemakers alike, amassing over 500K cumulative streams and 1.5M views alone on the groundbreaking “Smells Like Sex” music video.

Listen to ANARCHY on all streaming platforms: https://sizzyrocket.lnk.to/anarchy

While the album title, ANARCHY, may sound culturally topical, it was actually chosen in January as a nod to Sizzy’s punk rock roots and her own personal chaos. Through the creation of the record, Sizzy writes that she was, “searching for and destroying versions of myself that no longer serve me, going right up against the glass of heartbreak, wreaking havoc on life as we know it and pushing my ambition to its golden limit.”

Sizzy challenges what it means to be a pop artist in 2020. Rather than holding herself to a rigid set of standards, she constantly pushes the limits of her own musicality and creativity, ruthlessly coloring outside the lines in the process. Since her 2016 debut album THRILLS, Sizzy has built up a rabid online fanbase. Over the past few years she has continued to deliver beloved records, like her 2017 mixtape, Hot Summer, and her 2019 sophomore album, GRRRL, the latter of which was supported with a sold-out US tour. When she’s not writing her next hit record, Sizzy is trading fan mail with her cult, building her independent record label Lost Chrrry, designing and packaging her own merchandise, creating and distributing zines, and booking her own tours.

Speaking on what she hopes fans will gain from her new record, Sizzy writes, “I want you to be able to drown in this record — indulge in the big, dangerous feelings. Because fuck it — that’s who we are, who we’ve always been, and you can be whoever the fuck you wanna be. Even queen of the world, just for a moment.”