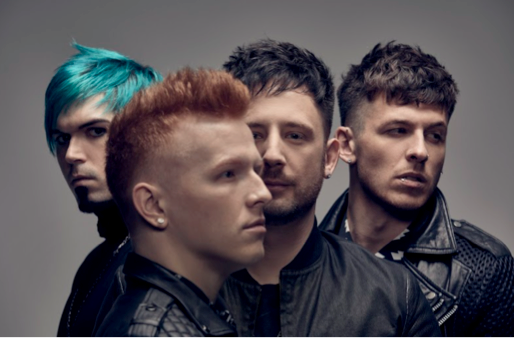 From Ashes to New releases a new video for their 2018 song “Broken,” featured on the upcoming Sno Babies film and soundtrack.

The song conveys a message of perseverance and believing in yourself when others try to push you down, a message close to the band’s heart and close to the message of the film, available on demand 9/29/2020. The soundtrack is out NOW.

The movie follows two high school best friends Kristen and Hannah –smart, popular, college-bound – and addicted to heroin. The pair of seemingly unlikely addicts spiral down a path of destruction, hiding their secret from busy parents behind pink bedrooms and school uniforms. Sno Babies shows how easy it can be to both miss and hide the signs of addiction behind “good” neighbourhoods and busy communities.

Sno Babies raises money for the Global Recovery Initiatives Foundation (GRI) and the Amy Winehouse Foundation, to help fund critical support services for people in recovery. Better Noise Films’ share of profits from the film and all artist royalties from the soundtrack are being donated to these two worthy organisations with matching contributions from Better Noise Music.  “We know from personal experience the devastation and heartbreak that addiction can bring. Since setting up the Amy Winehouse Foundation in our daughter’s memory 9 years ago, we have learnt so much about this condition. We have also learnt that recovery is possible and people can go on to live wonderful and fulfilling lives,” says Mitch Winehouse of the Amy Winehouse Foundation. “We’ve made it our mission to work with people in recovery and to support young people who are struggling with the same sorts of issues as Amy and we’re delighted that Better Noise and SNO BABIES are helping us to do that.

The “Broken” video includes footage from the highly anticipated film. From Ashes to New frontman Matt Brandyberry’s own experiences with addiction make the video even more powerful. He expresses, “It was a great opportunity and made perfect sense given my track record with 4 years of sobriety and my personal battles with my own addiction. The band as a whole have always been advocates for people who have faced down their demons and overcome great odds. Recovery is a rough journey and we want our fans to know that we support them.”

From Ashes To New’s current album, PANIC, is in stores now. Brandyberry, joined by guitarist Lance Dowdle, vocalist Danny Case, and drummer Mat Madiro (Trivium). Brandyberry credits the undeniable musical magnetism of these eleven songs to the enduring lineup. “The chemistry between us is there and fans who have seen us recently have been very vocal about the fact that we are firing on all cylinders.”  In order to reach the potential of these songs, the band reunited with producer Colin Brittain (Papa Roach, All Time Low) who previously produced the band’s single “Nowhere To Run” and shared their laser-focused musical vision. “On the last record we got the chance to do one song with Colin and it was kind of on a whim,” Brandbyberry explains. “We really liked his approach and the creativity Colin brought to that song and thought that if we could do that with the short amount of time we had together, what could we accomplish making an entire album with him?”

The band also teamed up with Erik Ron (Godsmack, Motionless In White) who brought his dynamic style to the title track “Panic” and “Wait For Me.” The result is an album that showcases how much FROM ASHES TO NEW have grown over the past two years, much of which was spent on the road touring with bands like Five Finger Death Punch, Papa Roach, Ice Nine Kills and Skillet.