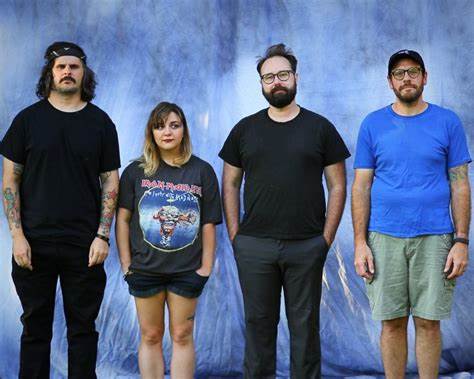 Melodic, aggressive, catchy, unapologetically pop; all have been used to describe Attic Salt.

Residing in the vibrant punk scene of Springfield, IL, Andy Harmon, Fred Malcom, and Skip Davis have been friends since the late 90’s and have spent a majority of that time playing in bands together. In late 2015, the group befriended Alyssa Currie to start a new project called Attic Salt.

In 2017, Attic Salt released their self-titled debut and it quickly became a year end favorite by many who heard it. Receiving praise from publications such as PunkNews, Razorcake, and Bad Copy, the band quickly developed an undeniable buzz. PunkNews highlighted “Guitarists Andy Harmon and Alyssa Currie have one of the best dual dynamics I’ve heard on vocals in quite some time. “

After supporting the record with tours in the United States and abroad, including appearances at The Fest and Pouzza Fest, the band went back to work on their second album. Get Wise is a collection of unabashedly honest pop-punk songs that builds on their self-titled debut and showcases the songwriting of Andy Harmon and Alyssa Currie. Every track is a deadly earworm and a reminder that much can be said with four chords and a melody.