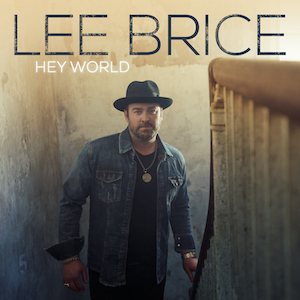 The 15-track collection comes at one of the most unique times in modern history and Brice meets the moment as only he can – with the signature relatability in his lyrics and his captivating vocals. Three of the album’s tracks including current US Top 5 radio single, “One of Them Girls,” the #1 hit song with Carly Pearce, “I Hope You’re Happy Now,” and the newly released title track, “Hey World” (featuring Blessing Offor) are all available today.

Additionally, Brice has released the accompanying music video for title track “Hey World” (feat. Blessing Offor). The powerfully reflective video beautifully highlights the retreat from the overwhelming pressures of the world around us. Reminding us all to take a break from the bad news and spend some time with ourselves, loved ones, and be mindful of what truly matters.

“We wrote the title-track from an introspective, truthful place, and probably what most people are actually feeling right now,” shares Brice. “With everything that is happening in the world currently, and how fast paced we are as a society, in general, sometimes you just want everything to stop – just to appreciate what we do have. People are suffering and it can’t be ignored.”

Moving through the experience of these 15 songs takes you from the desire to shut out the craziness of the world through the song, “Hey World,” to a message from the great beyond to family and friends with “Save The Roses,” onto the stop-you-in-your-tracks “Lies,” then all the way back around to “Atta Boy” and “More Beer” – all-in providing a fully-immersive, perspective-bringing, real-life look at our world.

“Hey World is just my next step in life. Where I am, who I am, what I love, and what I feel,” says Brice. “From the songs, to the production, to the order they play in, I always have and still do make it my goal to get better and better at what I do. Short of my family, my wife and friends, my music is the deepest part of me. So, I am overjoyed to say that I think I have made my best project to date. I stand by everything I have ever done, but pull from it as well to help me exceed my own expectations. Because of my team, my co-producers, my engineers, my label, I was able to make what I hope will be my most successful album to date.”

Brice has 11 consecutive RIAA single certifications along with multiple gold and platinum albums, has taken 7 radio singles to number one, performed as part of the Library of Congress Gershwin Prize for Popular Song honouring Garth Brooks in 2020, and is just getting started. The ACM and CMA Award winner, and GRAMMY nominee, is in the middle of a meteoric rise at Country radio with his song of the summer, “One of Them Girls,” the follow-up to his #1 with Carly Pearce on “I Hope You’re Happy Now.” Upcoming 2021 UK/European tour dates (rescheduled from 2020 – original tickets remain valid):

Meanwhile, with over 2.2 billion on-demand streams, and three billion spins on Pandora, Brice continues to enjoy massive success at country radio, digital streaming services, and on the road. He is currently Top 20 at Country Radio with his fastest rising single career to date, “One of Them Girls,” which follows his #1 with Carly Pearce on “I Hope You’re Happy Now.”. His mega-hit, “Rumor,” is nominated in the category Single of The Year at the 55th Annual ACM Awards. One of the most-played country artists of all time on Pandora, he is a member of the company’s “Billionaires Club,” becoming only the second country artist behind Keith Urban to receive the Pandora Billionaire plaque. Lee is also a GRAMMY nominee, a CMA and ACM award winner, and he’s taken seven radio singles to Number One: “A Woman Like You,” “Hard To Love,” “I Drive Your Truck,” “I Don’t Dance,” “Drinking Class,” “Rumor,” and “I Hope You’re Happy Now.” Garth Brooks, Jason Aldean, Kenny Chesney and others have recorded his songs, and he’s performed on numerous TV shows, including NBC’s Today, ABC’s The Bachelor, NBC’s The Voice and FOX’s Miss USA 2018. Lee performed as part of the Library of Congress Gershwin Prize for Popular Song honoring Garth Brooks, aired on PBS March of 2020.