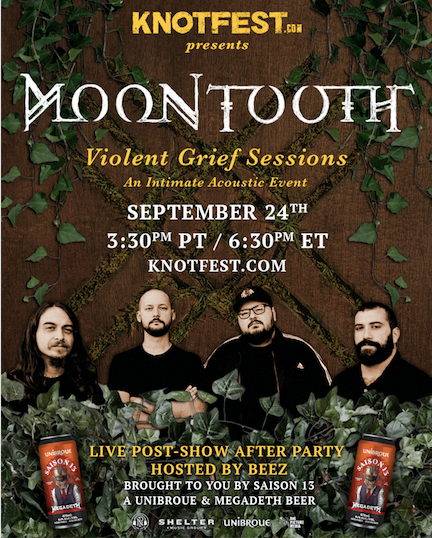 The band will be sharing a very special performance of their recently released EP, Violent Grief: Acoustic Selections, along with a few surprises on September 24th at 6:30PM EST on KNOTFEST.com. Following the event, fans can tune into a live post-show After Party hosted by Beez, brought to you by Saison 13, a Unibroue and Megadeth Beer.

Available to stream today via Pure Noise Records, Violent Grief: Acoustic Selections is a five-track EP is comprised of brand new track “Six of Swords” and four songs from the band’s critically-acclaimed 2019 release CRUX, including previously shared “Awe At All Angles (Acoustic)”.

“Time is the only thing with a chance of washing grief away. It’s a process that can be ugly, violent and in most cases not brief,” shares John Carbone (vocals) on the meaning behind the EP title. “In order to let time do it’s work properly, a person must recognize the difference between the violence that’s necessary and the violence that’s clung to. At some point, grief is a choice. When time’s done it’s job, it’s up to us to put the hurt down.”

Machine (Lamb of God, Every Time I Die, King Crimson, Clutch) and Lamb of God’s Mark Morton worked on the pre-production of Crux. The album tells the story of the band at this crucial point where the past must die so new life can begin. The album was officially released on March 29th, 2019, and received over 100,000+ streams in its first week. It also hit the Billboard charts, reaching #13 on Heatseekers, #23 on Hard Music, #43 on Indie Label, #62 on Digital Albums, and more.

CRUX was chosen by Rolling Stone as one of their Top 50 Albums of 2019 while garnering acclaim from outlets like Pitchfork, Guitar World, Revolver, Invisible Oranges, Metal Injection and more.

“Not since the early days of the Mars Volta has a rock band managed to sound so wildly adventurous while delivering such unshakable hooks.”  – Rolling Stone

“The Long Island prog-metal band bursts with enthusiasm and rabid energy, as if Mastodon’s apocalyptic visions were replaced with cosmic wonder.” – Pitchfork

“Moon Tooth walk that perfect line between metal and

“Moon Tooth pull off this kinda thing pretty well, and the string arrangements that flesh out “Six of Swords” are a nice touch too.” – Brooklyn Vegan“Moon Tooth was never your typical metal band.  They always crafted interesting and authentic songs layered with alt, rock, folk and ambient vibes.” – American Songwriter

ABOUT KNOTFEST.COM – Knotfest.com is the first truly global media site that encompasses the entire world of culture. Knotfest spans the full culture experience offering the complete destination for heavy culture fans to connect. Just as the ever-expanding portfolio of global Knotfest festival events have, Knotfest.com is reaching new fans across the world through high end content, exclusive series, innovative fan integration, and vast, cutting-edge lifestyle coverage not embraced anywhere else.