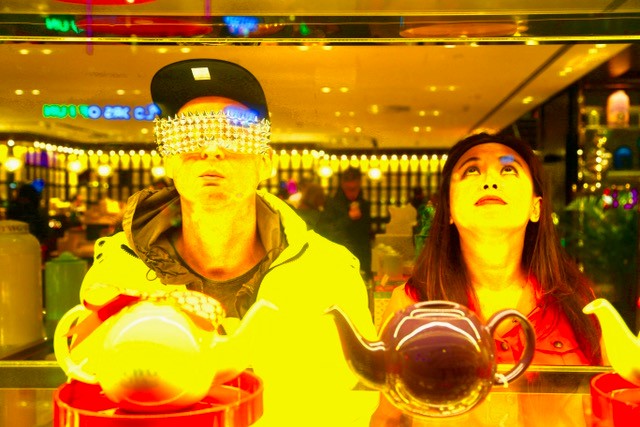 Wearing their influences on their sleeves, the 1982 smash-hit gets a pared-back and poignant re-working courtesy of London duo: Hal St John and Cherrie Anderson.

Acolytes of Yazoo and children of the ‘80s synth-pop revolution, “Only You” has always been a firm favourite in the Ooberfuse camp. But does blood run thicker than water in this instance? Shedding light on the many reasons why the band chose to cover this particular classic track, Hal St John says:

1. “Only You” is a melodic electronic track that nevertheless carries warmth of genuine emotions. That’s a good description of our own material combining modern music technologies with genuine heartfelt emotions.

2. “Only You” also allows us to demonstrate the close vocal harmonies that feature on our own tracks.

3. One final reason is that I believe Vince Clarke was inspired by Mozart when he wrote this track. The last DNA test I did showed I have Austrian/German/Swedish ancestry so I have a genetic affinity with “Only You”.”

Out now, the “Only You” cover is one of 6 new tracks that will feature on an upcoming EP ‘Tears Can Only Sting’; a release that won’t require a DNA test for listeners to recognise Ooberfuse’s evident synth-pop credentials. Recalling the melodic and memorable electronic pop of The Eurythmics to Saint Etienne, The Postal Service to Charlie XCX, it’s a record that testifies to the duo’s love of the genre and its history; while staking their place in its vibrant tapestry.

Also featuring the atmospheric: “Father” (a track dedicated to Hal’s late father and released on Father’s Day earlier this year), it’s one of many original cuts that showcase Ooberfuse’s honest, soul-baring songwriting abilities on peak form. Set for release later in the Autumn via Fretsore Records, the full track-listing for the EP is as follows:

OOBERFUSE – ‘TEARS CAN ONLY STING’ EP

From showcasing at The Great Escape to opening for Rudimental in Beijing, Ooberfuse have developed a rare international touring niche, performing in countries from India to Iraq, to festivals in Beijing to Brazil. Their music has featured on a who’s-who of prestigious press and media outlets including Music Week, BBC Radio 1, BBC London, Rolling Stone India, Guardian Music and DJ Mag. Legendary trailblazers such as Boy George, Paul Oakenfold and Sister Bliss (Faithless/Ministry of Sound) have sung their praises. The band will release their latest EP, ‘Tears Can Only Sting’ this Autumn.