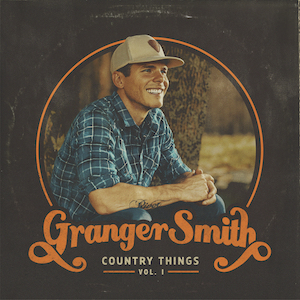 Granger Smith, along with his wife Amber, and their children announced on their YouTube series “The Smiths,” the release date of September 25th for part one of Smith’s two-part studio album, Country Things, Vol. 1.This eight-song volume gives a glimpse of he and his family’s current country state-of-mind, including a guest appearance from his good pal Earl Dibbles Jr.

The first volume of the album is available for pre-order with three instant grat tracks out now, “That’s Why I Love Dirt Roads,” “Hate You Like I Love You,” and the title track “Country Things.” This new batch of music from the born-and-bred Texan initially started back in early 2019. Granger was writing and creating and prepping for his 10th studio album when the unexpected passing of his son River struck and all of those plans abruptly came to a halt. In the months that followed, mourning River changed the way Smith heard the music, and songs like “That’s Why I Love Dirt Roads” had taken on new meaning.

“My life is just…different now. Or maybe a better way to put it is, I see life differently now,” says Smith. “This collection focuses on the things that money and politics and status can’t buy. The things that you can center on and I want to live my life for. The things you want to raise your kids with and find joy in. The country things.”

Smith decided to let his music do the healing. Not just for himself, but for anyone who needs to hear songs that let them know they’re not alone on whatever road they’re taking.  With that new way of looking at life, Smith went back to work on the album he had been planning.

The first tracks out now include “Hate You Like I Love You,” a mid-tempo song, and while the title may sound like a contradiction, it really makes total sense, Smith says: “They say the opposite of love is not hate; it’s indifference. Hate is actually a close relative of love. It takes the same passion and the same extreme emotional effort to hate as it does to love.” This song shows the struggle of turning love into hate as a last resort to get over an unreciprocated love. Accompanying this song is the title track “Country Things.” Just as it sounds, this song lists an array of “country things” that hold true to what brings peace and a sense of home for Smith and his family.

Over the course of his groundbreaking career, Granger Smith has amassed a massive and rabid audience now known as “Yee Yee Nation” built through heavy touring and grassroots fan engagement. He now has a social media following exceeding eight and half million along with more than one billion online video views. Signed to BBR Music Group’s Wheelhouse Records, Smith broke onto the national scene with Remington, an album that garnered him the No. 1 smash “Backroad Song.” Smith was also awarded a BMI Country Award for writing, producing, publishing and performing “Backroad Song” and followed it with the Top Five hit, “If The Boot Fits.” “Backroad Song” was one of the Top 10 Most Played Country singles of 2016 according to Mediabase and has been certified RIAA PLATINUM. His album When The Good Guys Win spawned the hit “Happens Like That” that has been certified RIAA GOLD. Not only has Granger stacked major accolades as an artist, but he also released his first-ever book If You’re City, If You’re Country, which immediately hit No. 1 on Amazon best-selling lists. Known as an artist but also for his alter-ego, Earl Dibbles Jr., his family’s YouTube series “The Smiths” and his iconic outdoor apparel company, Yee Yee Apparel, Smith is a jack of all trades. Additionally, Granger and his wife Amber Smith started The River Kelly Fund to bring awareness and invest in children in need, arts and education, wildlife preservation, military, veteran and first responder assistance, donor affiliations, and many more organizations in honour of their son River Kelly Smith. Taking all of these experiences and channeling them into good, Smith is releasing his 10th studio album on September 25th called Country Things, Vol. 1, which ultimately showcases the man, the father, the performer and bona fide artist Smith has become.