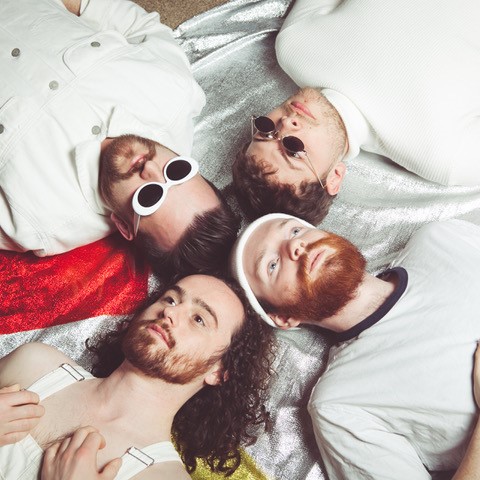 You can hold-fire on the cake and party poppers for now though. In a year where finding cause for celebration has been a challenge at the best of times, the ‘Congratulations’ on offer in TV Coma’s new single are rather aptly on the sardonic side.

More slap-in-the-face than slap-on-the-back, ‘Congratulations’ is a break-up song for the millennial generation. Written immediately after a messy split, the track recounts a fiery farewell with a former lover, while dwelling more deeply on the impossibility of truly escaping an ex in the digital age. “Congratulations, you win again…” deadpans Leo Troy, his vocal sneer stinging with venomous release as he spits lyrics of cutting sarcasm and knowing self-awareness throughout.

“It’s about the unexplored paradigms of modern relationships. As the first humans to publically document relationships, millenials were pioneers in dealing with the psychological impact of social media on modern day love. Congratulations explores the aftermath of this: how hard it is to get over someone when there’s a 24/7 feed of what they’re doing just a click away, when you see that person with another person, followed by a unique kind of acceptance.”

Coupling the elastic basslines and Coxon-esque guitars reminiscent of early Blur, with the rollicking bravado and emphatic choral hooks of Weezer at their peak, ‘Congratulations’ buzzes with an electrifying fusion of each. Reaching a critical mass of sprawling feedback, thunderous rhythms and toxic ripostes, like the relationship at the heart of the track, ‘Congratulations’ goes into an exhilarating and chaotic total melt-down.

Recorded at The Ranch Studios in Southampton, ‘Congratulations’ was produced by Neil Kennedy (Creeper/Milk Teeth), before final mastering by Pete Lyman (Weezer/Fallout Boy) at his LA studio.

Formed in a cesspit of post-university malaise, TV COMA are a power-pop band based in Brighton. After gaining coverage on Spotify’s “Hot New Bands”  playlist, plus airplay from Radio X, BBC Introducing, Louder and Fresh On The Net, the four-piece are now gearing up for the release of WUSS, their debut full-length album. WUSS is named after an essay by Bret Easton Ellis called “Generation Wuss” which criticises the millennial generation. On their debut, TV COMA look to re-appropriate the word for their own disenfranchised generation by writing punk-flecked millennial pop songs  drawn from the personal experiences of co-frontmen and siblings Max and Leo Troy. Delving into the psychology of the disoriented 20-to-30 year old, WUSS will present a scathing, empathetic and essential new record; laying bare all facets of a generation left blinking at the lights of a rapidly changing world that they helped create, but no longer understand.  A break up anthem for a post-truth digital age, ‘Congratulations’ is the latest single to be cut from their upcoming album: WUSS – out this Autumn