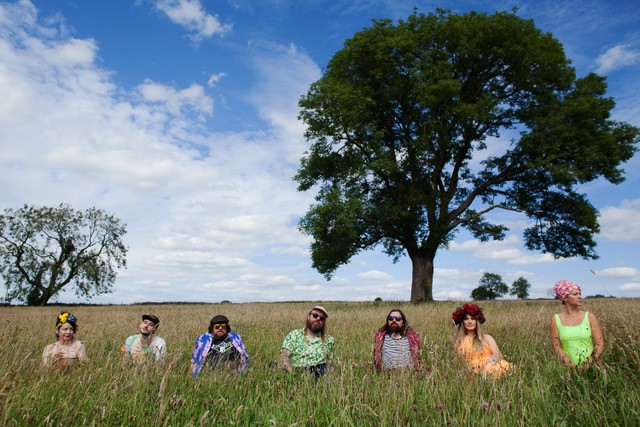 Produced by Ross Orton (Arctic Monkeys / Working Men’s Club) at his studio in Sheffield ‘The Wish’ is a passionate anthem for uncertain times. Amongst fuzzed up, new wave guitars from Rob Glennie and fierce, pounding drums from Allan Hutchison, lead singer Lee deadpans “reproduction reaps destruction”, as he states “I cannot save you, I can’t even save myself”.

“The song seeks to turn the mirror on society and reconsider how we approach our lives”, explains Lee, “I want to turn my nihilism into something positive!”

Heavy Salad’s debut album Cult Casual is set for release this September 25th through Dipped In Gold Recordings and was recorded by producers Christophe Bride at Oxygene Studio in Manchester and with Ross Orton at McCall Sound in Sheffield. Christophe, known for this work with Spear of Destiny and Theatre of Hate has recently been busy producing the forthcoming ACR album ‘ACR Loco’ forthcoming on Mute Records and Ross, known for his work with Arctic Monkeys and Amyl & The Sniffers has recently produced the forthcoming album by Working Men’s Club on Heavenly Recordings.

The LP was written by Heavy Salad at their base in East Manchester by the core trio of Lee Mann (live bassist with The Moonlandingz), Rob Glennie and Allan Hutchison. Formed in 2018, the band have been dreaming-up their debut ever since. Bonding over a joint interest in psychedelic horror films, with Panos Cosmatos’ cult classic ‘Mandy’ being a particular favourite, Heavy Salad loved the idea of being in a band like a psychedelic cult, albeit a cult with no rules, hence: Cult Casual!

A loose concept-album-of-sorts, Cult Casual explores the idea of finding your own reality in the modern world. Beginning with ‘Death’, the album takes the listener backwards through the very experiences of existence. Imagining after-life experiences to apocalyptic visions of the future, via hallucinogenic nights plagued with polar bears and conversations with the AI in your phone, it’s quite literally the journey of a lifetime…

“You could loosely describe Cult Casual as something of a concept LP” explains lead-singer Lee, “lyrically, it’s an exploration of the experience of modern reality, it feels like the LP exists for this exact moment in time, we can’t wait for people to hear it!”

Charged-up on a myriad of musical influences from surf-rock and free-jazz to over driven pop and experimental rock, Heavy Salad occupy that intangible space between perceived reality and the abyss of your mind. Adding another dimension to its textured sound, the trio are joined by live backing singers ‘The Priestesses’ and Oscar Remers, whose distinct vocals bring their own soulful, cosmic vibe to the Heavy Salad sound. And despite its kaleidoscopic and far-reaching sound palette, the band confirm that no distortion pedals were used in the making of Cult Casual.

Already championed by BBC 6Music’s legendary DJ Steve Lamacq and Louder Than War Magazine, the band are now gearing-up to release their extraordinary debut album. Combining a natural penchant for oddball melodies with a shared passion for the psych pop and acid rock wanderings of the likes of The Flaming Lips, The Beatles, Super Furry Animals, Blur and QOTSA, Cult Casual is an effusive melting pot of influences and ingenuity that you need in your life.