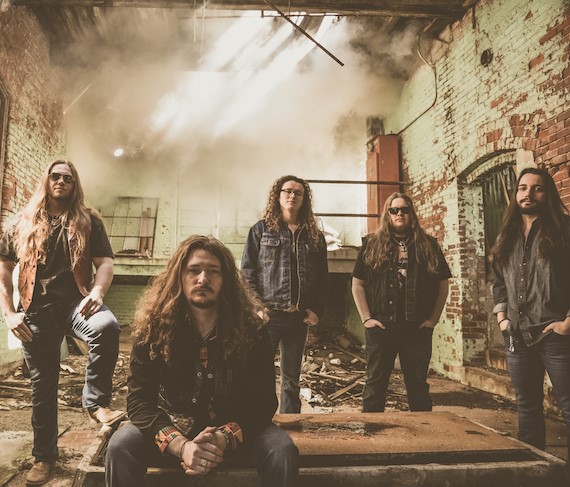 Whether it be on the banks of the Mississippi River or deep in the heart of the English countryside, rock ‘n’ roll lives, breathes, and burns on the outskirts.

Hailing from Rome, Georgia at the foothills of the Appalachian Mountains, The Georgia Thunderbolts rise up with a scorching signature style steeped in soulful southern swagger, blistering blues, and raw rock.

Out 21st August via Mascot Records, the quintet’s self-titled debut EP conjures a tried-and-true spirit through a fresh fire. The album will be available digitally only and ahead of this, they have revealed the video for Lend A Hand

The band are; TJ Lyle [lead vocalist], Riley Couzzourt [guitar], Logan Tolbert [guitar], Zach Everett [bass, harmony vocals, keys], and Bristol Perry [drums]. “We all grew up on rock music,” Riley says. “If I could think of three words to describe us, they would be ‘Hardworking, Determined, and Humble’.” Bristol grins, “If I could think of three words, they would be ‘Rock And Roll’.”

With a wide swath of inspirations, ranging from southern gospel and Hank Williams to Neil Young, Little Feat, Ozzy Osbourne and Lynryd Skynyrd, the band cut their teeth performing with everyone from Black Stone Cherry and The Kentucky Headhunters to the new crop of vibrant Southern Rock bands such as The Cadillac Three, Tyler Bryant & The Shakedown, Blackberry Smoke and Bishop Gunn. They recorded the record at Barrick Recording Studio, in Glasgow, Kentucky – a studio immersed in plenty of Southern Rock history and inspiration for any new band who are finding their way in the recording studio. The resulting EP comprises undeniable anthems steeped in anthemic riffs, wild harmonica, and pulse-pounding drums.

From the bluesy blend of “So You Wanna Change The World,” to “the first song we ever wrote,” the dynamic “Looking For An Old Friend,” The Georgia Thunderbolts rustle up a new era of rock ‘n’ roll on their dynamic five song EP. The seven minute-plus “Set Me Free” rolls from a hummable riff towards evocative soloing and an epic final crescendo, while “Lend A Hand” stomps along on a wild lick before a sweeping and soaring refrain.

In many ways, “Spirit Of A Workin’ Man” doubles as a calling card for the band. “That’s our anthem,” smiles TJ. “It’s got a deep lesson to it. You can’t knock down the little man. Everybody has a say-so. You strive to do better, persevere, and pull through hard times, if you have a strong faith and spirit.” “I relate the song to our band as a whole,” Riley elaborates. “We all grew up humble. We’re still humble. We’ll always be humble to the end. We were raised right to be five working men. It’s who we are.”

“In Georgia, you hear Lynyrd Skynyrd, The Allman Brothers, and all of the greats everywhere,” Riley and Logan conclude. “Rock and roll is something that comes naturally for us. We love it and are in it for the long haul. We feel like we can bring it back.”