DarWin – “Nightmare Of My Dreams” 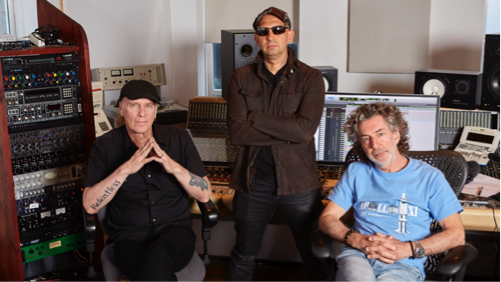 Following the release of debut album “Origin Of Species” in early 2019, DarWin releases a new single, “Nightmare Of My Dreams”, on the 14thAugust 2020.

The epic 7 plus minute “Nightmare Of My Dreams” builds on the themes set out by DarWin on “Origin Of Species”.

The announcement of the first single will coincide with the release of the first album track, “Future History”.

Both songs are taken from the forthcoming album, “DarWin 2: A Frozen War”, which will be released later in 2020.

“Darwin 2: A Frozen War” was produced by DarWin and Simon Phillips and recorded primarily in Iceland and the USA.

DarWin says, “We started working on DarWin 2: A Frozen War while still finishing Origin of Species.  This new album is therefore more like a final chapter to OoS.  The title song “A Frozen War” represents the final battle for the future of Earth.  It has a heavier feel than the first album, and I think represents our best stuff.

“We shifted live recording to Iceland and Billy Sheehan joined us on bass in the studio while Matt was often traveling with Elton John.  We’re also joined on the album by Guthrie Govan, Greg Howe and Derek Sherinian doing killer leads, and many more players that are super exciting.

“This first song we’re releasing, “Future History” is about traveling faster than lightspeed and therefore going back in time.  It’s a real chuggy jam song that should rock hard.  Matt’s thick harmonies soar over the heavy grooves to provide a sensation of flying next to a ray of light and watching your life pass before you.  It was great to jam with Billy and Simon on this and trade licks with Greg in the solo section.  Check it out!”

DarWin’s critically acclaimed debut  “Origin Of Species ” was the first installment in an epic saga that addresses the challenges of mankind in our coming era.  It depicts the role of a changing planet, and the potential, as well as limitations, of technology to help solve mankind’s greatest challenges. A complex project that’s eschews the hollow immediacy of much contemporary art. A story that demands attention and imagination.  With music sweeping in scope, at times evoking hard rock virtuoso shredding, alongside grand orchestral compositions, warm harmonies and soaring choruses. A project that is even more relevant in the strange times we live in.

“Nightmare Of My Dreams” will be released on the 14th of August 2020. It will feature an exciting narrative video, also directed by Nigel Dick
http://www.darwin.is/