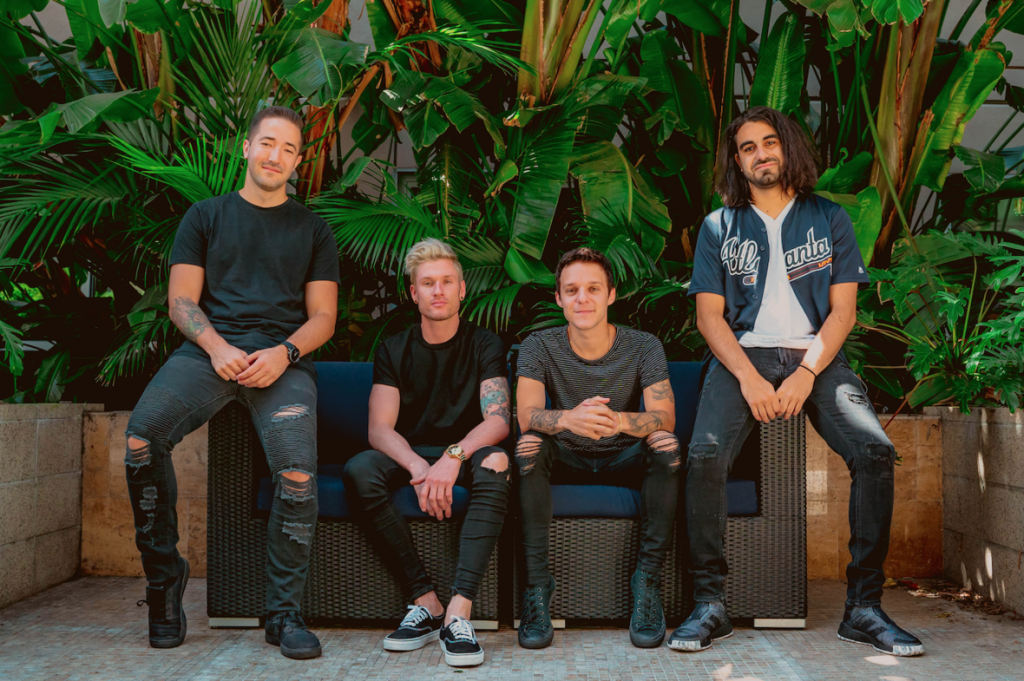 Pop-punk phenoms Makeout, have debuted “Home” their first single with new frontman Kyle Dee (formerly a Season 11 American Idol contestant, and lead singer of Chicago mainstays, The Frantic) and bassist AJ Khah (who was previously a member of Sleep On It).

“History is in the making / Find what you want and go ahead and take it,” so proclaim pop-punk quartet MAKEOUT on “Hold On” from their upcoming EP, Home. It’s a song of triumph, a reminder to keep going through dark times – and it’s also the band’s comeback song.

Following the 2017 release of ‘The Good Life’ (produced by John Feldmann and featuring co-writes with 5 Seconds of Summer’s Calum Hood and Ashton Irwin and blink-182’s Travis Barker) and a year and a half of constant touring, MAKEOUT hit a bump in the road when the departure of former vocalist Sam Boxold left guitarist Tyler Young and drummer Scott Eckel unsure of the band’s future. They had an EP and two music videos ready to go when everything seemed to fall apart. “We had a fair few setbacks, and it was really discouraging,” Eckel admits. “We really weren’t too sure how it was going to pan out.”

Now joined by vocalist/guitarist Kyle Dee and bassist AJ Khah, MAKEOUT are ready to share ‘Home’, their first new material with the new lineup, and their first new music in almost three years. “We couldn’t ask for better new members with the band, and it’s really changed the mood moving forward,” says Young. “Everybody’s gung-ho and onboard and really wants to do this.”

While Dee describes joining MAKEOUT as a natural transition – he’d long been a fan of the band, and their sound was “the type of music that I would already be writing and that I had written in the past” – he didn’t always know he’d end up as their vocalist. After seeing MAKEOUT play in his hometown of Chicago, a gut feeling prompted him to ask Young if they needed a bassist. When a spot opened for a vocalist instead, Dee stood out among more than 500 submissions. Many had chosen to audition with “Crazy” – the band’s most popular song, with more than 6 million streams on Spotify – but he went with “Childish,” nailing high notes and vocal runs that no other entrant could. Khah had befriended Eckel and Young while on Warped Tour, and when the time came to leave his previous band, he wasn’t ready to call it quits on music altogether. Joining MAKEOUT was his chance to destroy everyone’s expectations. “We’re coming out of left field with this,” he says, “and to me, it’s a lot of opportunity…. I’m dancing on the edge of my seat right now, ready to show the world what we got going for us.”

Currently gearing up to independently release ‘Home’, the momentum is flowing for MAKEOUT once again. The EP keeps the high-energy tracks and soaring vocals of ‘The Good Life’ while leaning towards a heavier and more aggressive sound – a shift that’s come with the band’s new lineup and their interests. “But the cool thing is, I love all that pop stuff, too,” Dee adds, “and with us not having a label or anyone really pressuring us to do a certain thing, we were able to just make the songs that we wanted to make.” Though the members of MAKEOUT are spread out around the globe – Eckel is in Australia, Young is in Los Angeles, and Dee and Khah are in Chicago – distance hasn’t stopped them from making songwriting a truly collaborative process. “It felt super organic,” Khah shares. “We didn’t have to sit down and be like, ‘okay, what are we going to sound like?’ – we just started writing, and it started to flow.”

Producer and manager Matt Holmes describes the making of ‘Home’ as a unique process: “I had the boys fly to PA with the intention of getting some demos hashed out. After digging in for a week or so, I think we all realized the tunes were turning into something special. We were fortunate enough to have Travis Barker and Matt Malpass work with Scott on the drums and programming, which definitely took the songs and production to another level. It was exciting watching the progression and getting to see the songs come into view. I’m really proud of the band, and I’m confident these songs will help serve as a proper launchpad for the next phase in MAKEOUT’s career.” Barker had a hands-on approach to production, changing song structures and drum parts and even playing on the EP (“Some parts it’s hard to tell and some parts it’s quite obvious, but he drums a little bit in every single one of those songs,” Eckel explains). The EP’s title track also came as a collaboration with Jayden Seeley of With Confidence.

MAKEOUT will be releasing ‘Home’ soon, but the newly released title track is already a clear sign that the five-song EP is just the beginning of an exciting new chapter – and they can’t wait for the world to hear it.