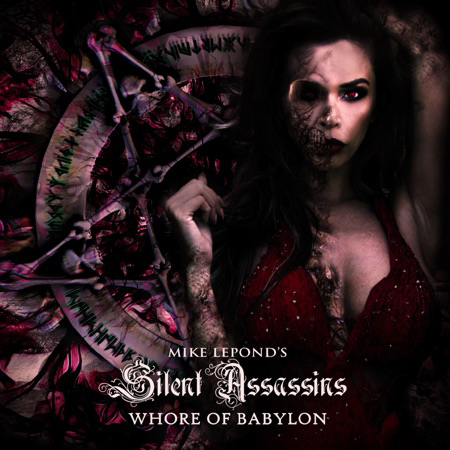 MIKE LEPOND’S SILENT ASSASSINS’ anticipated new full-length, Whore Of Babylon! Forging a union between the mighty worlds of heavy metal and ancient history, Whore Of Babylon serves as the band’s third studio album and is a no-holds barred, gauntlet-thrown, true heavy metal mission led by LEPOND, known worldwide as one of the foremost bass virtuosos in heavy metal music and a member of progressive metal band Symphony X.

In celebration of its release, the band has delivered a new video for the track “Tell Tale Heart.” Offers LEPOND,”Take the ultimate journey through darkness and death with my metal movie score to Poe’s classic story. This song is epic and one of my proudest moments.”

Whore Of Babylonwas recorded between various tours with Symphony X in Symphony X guitarist Michael Romeo’s home studio. LEPOND also plays all rhythm guitars, while the core of SILENT ASSASSINS– vocalist Alan Tecchio and guitarist Lance Barnewold – remains unchanged. From the scintillating fury of “Dracul Son” to the baroque mystery of the title track, with Whore Of BabylonLEPONDhas written and produced the sort of album that traditional metalheads have been dreaming of. Amidst the furious aural assault, LEPONDalso marches through the tales of some of history’s most fascinating and brutal characters.

MIKE LEPOND’S SILENT ASSASSINS’ Whore Of Babylon is out now on Silver Lining Music on CD and digital formats. D2C bundles are also available. For orders, go to THIS LOCATION.

As the world spins on an axis weirder and crazier than any of us could’ve predicted even a month ago, there is more purpose and value in knowing your history than ever before. When that learning is wrapped in the sort of molten metal that is Whore Of Babylon, education becomes so much better. Listening to MIKE LEPOND’S SILENT ASSASSINSis a gateway to halting the cycle of human ignorance: a sentence you might’ve thought you’d never read, but one which can most certainly bear the finest of fruit… that and it will push your speakers to the brink of metal-motivated madness.

“With Whore Of Babylon, MLSAreminds us that the power of the riff, an intriguing lyric, and melodic heaviness are at the core of our beloved genre of music. There is a purity to the songs on Whore Of Babylon that is true to the rawness of heavy music. This is not about perfection but instinctive performance…” — Metal Nation

“MIKE LEPONDand his enthusiastic band mates show once again how well done and powerful heavy metal should sound. Without losing the basic structures, LEPONDgives this album so many twists and turns that you want to press the start button again.” — Markus Heavy Music Blog

“In simple terms, this is just good heavy metal music, in its classic definition. There are elements of power metal, prog metal, speed metal, folk metal, and just straightforward rock ‘n’ roll, but the riffs and attack here hearken to the genre’s first halcyon days without sounding dated or wistful. LEPONDand his crew use motifs and styles from across the decades to prove that metal is every bit as relevant today as it’s ever been. There are some quieter moments, but overall, Whore Of Babylon is a ferocious and heavy experience.” — Metal Asylum

“While the Silent Assassins’ third album is more varied than their past efforts, it never loses sight of their proud bombast. Whore of Babylon isn’t a subtle effort by any stretch of the imagination, featuring enthusiastic performances and electrifying theatrics regardless of the mood at hand. It’s a reflection of everything that has made them such an enjoyable act to follow…” — Ghost Cult

“Always striving to get better at his craft, Whore of Babylon delivers exciting songs in a variety of catchy metal arrangements while being very engaging and dynamic. Let’s hope that once the pandemic clears, he can bring this material to some live stages, as he has all the tools to create some memorable shows.” —  Dead Rhetoric

“…a bombastic and over the top metal experience…” — Wormwood Chronicles

“…Come for the dark tales and crushing riffs, but stay for the lofty choruses and virtuoso displays…” – Sonic Perspectives