All Fluffed Up – Pillow Queens 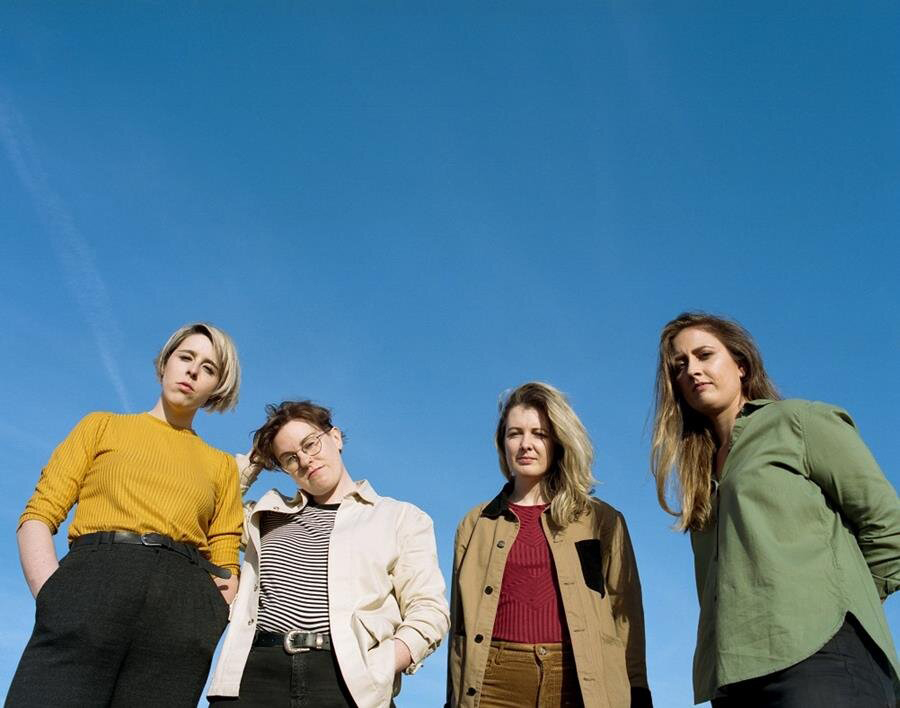 When Pillow Queens announced themselves in late 2019 with the soaring single “Brothers”, their bruising interpretation of mourning for a lost loved one immediately caught widespread attention.

Channeling wrought emotion through a sea of 90s grunge and indie-rock sounds, the Irish four-piece (from Dublin, Wicklow and Kildare) forge a powerful noise that is all their own – but meant for everyone. Pillow Queens offer a cathartic experience filled with camaraderie and solidarity.

Inclusivity, choice, and togetherness are just some words that chime loudly with Pillow Queens, and today’s new single “Handsome Wife” arrives at a time when those words have rarely had more impact. In a physically, and morally, divided world “Handsome Wife” looks at the importance of life’s often underappreciated moments, as the band explains: “Handsome Wife begins with a glimpse into an emotional homecoming, one that intensifies and romanticises the seemingly insignificant. Throughout, the mundane but tender moments are held up and deified, paying reverence to the ease in which a love can thrive outside the realms of tradition. The song continuously references structures and rituals that were once out of reach, but are now within our grasp. In spite of this Handsome Wife affirms that they pale in comparison to the communities we’ve built ourselves.”

Watch the video, directed by Kate Dolan below.

Events currently taking place throughout the world only serve to stoke a fire under the likes of Pillow Queens, who find themselves continually inspired by a Dublin that is no stranger to fighting social injustice. Street artists, fashion designers, musicians, film makers and more comprise a scene which routinely champions queerness and marginalized groups, and engages with and activates young people in response to the likes of the city’s ongoing housing and mental health crises. Pillow Queens’ songs of togetherness and unity ring out louder than ever before.

In their short lifespan as a band they’ve released two demo EPs, performed on a successful string of UK & Irish dates & festival appearances, had playlisting from BBC 6 Music, and found themselves opening for the likes of American Football and Pussy Riot, as well as stadium performances opening for IDLES and Future Islands.

With all this under their belt, the band began working with Mercury Prize nominated producer Tommy McLaughlin for their single ‘Gay Girls’ – which received a nomination for the RTE Choice Music Prize song of the year, as well as International pickup from NPR’s World Cafe and KEXP. The song also found its way into the heart of actor Cillian Murphy and his BBC6 mixtape show.

2019 saw Pillow Queens venture into mainland Europe, as they lit up the Eurosonic festival and completed a string of tour dates opening for Soak. The tour was a messy and joyous affair captured beautifully in the DIY video for the bands summer single ‘HowDoILook‘.

The band were then invited to perform a live session for KEXP at Iceland Airwaves, then further shows in NYC and LA, before SXSW 2020 beckoned. Tour dates are being rescheduled for 2021.