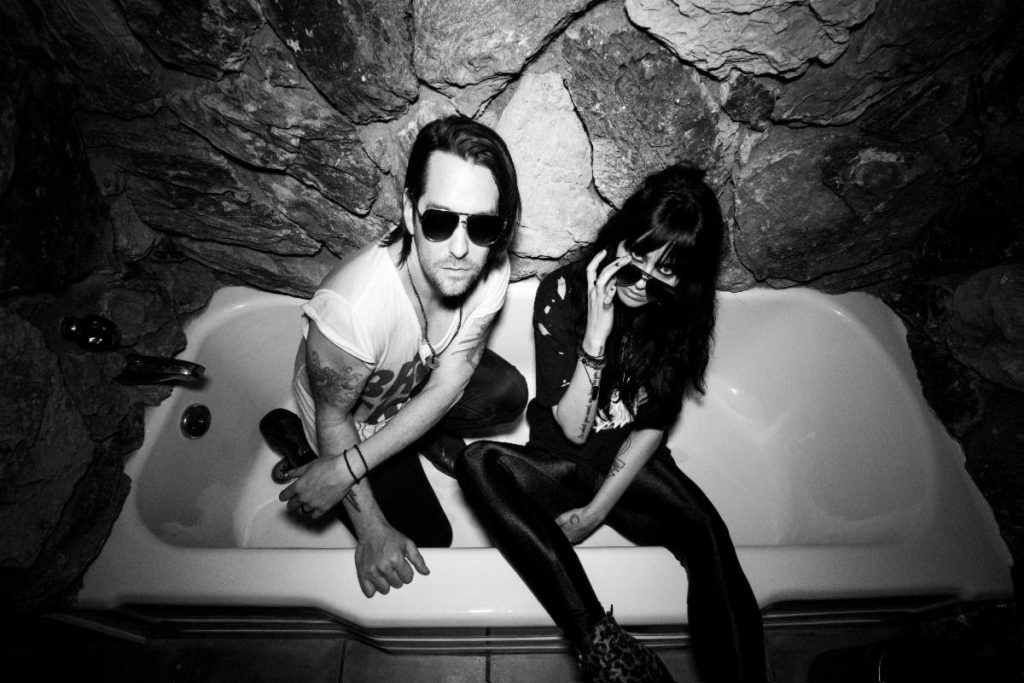 This 4 track collection is available for order here. To help celebrate this release, DeadPosey will be performing live and conducting a Q&A on the SPIN Magazine Twitch channel tomorrow Tuesday, June 23rd at 7pm PST. Submit your questions here for a chance to win a merch bundle. Answers and winner will be announced during the live stream. Be sure to tune in to the live stream with DeadPosey here.

Like ghosts from rock ‘n’ roll lovers past, wedded duo DeadPosey’s aggressively provocative sound lingers between two worlds like Jekyll & Hyde, instantly hypnotizing you. Following up on their debut EP Freak Show, DanyellSouza (Vocalist/Producer) and Tony F. (Producer/Multi-instrumentalist -formerly of Eve 6) have concocted a world from the dark corners of their minds with their 2nd EP, Malfunction.

The four track EP invites listeners into a nightmarish fever dream, fueled by Danyell’s wicked vocals, Tony’s unholy guitar and drum tones, and flashes of soul-sucking industrial production meticulously arranged by the two. Topped with lyrics that will haunt and seduce you into the pair’s twisted minds, what better way to visually symbolize Malfunction than with the cover art they photographed, last minute while in quarantine at home along with the rest of the world.

Head Of The Snake

A little back story on creating the official music video for ‘Parasite’ in the words of Danyell Souza:

“Music videos and the visual medium are such an important aspect to Dead Posey that we were crushed when hit with the reality that due to the state of the world we would be unable to shoot all the music videos we intended for our EP, Malfunction. However, a few months ago we did a day of filming some video content and did a few takes of performing our song ‘Parasite’while we were at it. Thanks to that day of shooting using our manager’s camera, we had enough raw footage that we were able to edit it ourselves in iMovie & Final Cut and turn it into the official music video for ‘Parasite’.

Given how everything has been the last few months we were required to do everything with this video completely in-house, when we had originally planned on working with directors and other professionals for our videos. We set up a whole day of shooting, bought all the props and staged the set, rented the location and arranged lighting & camera angles (special thanks to our digital marketing manager Paul Crary for working with us on the shooting day and letting us really hone in on our vision). We are used to doing most everything ourselves with our music anyways – writing, recording, producing, mixing, mastering – so this wasn’t new to us in that regard. Art is created in all types of situations; in this case it was a happy accident that we could concoct a music video on a shoestring budget out of this footage. We hope you enjoy it!“