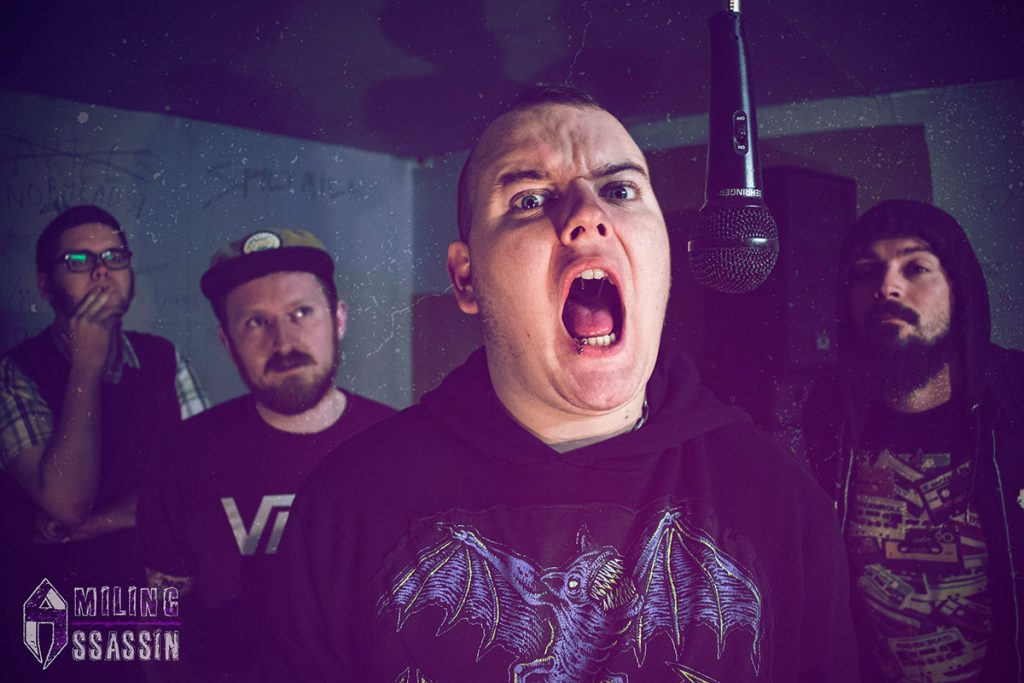 Following the hugely well received debut album release of ‘Plight Of The Millennial‘, Smiling Assassin have just unleashed their latest single ‘Divide & Conquer‘. In under two minutes the band delivers a massive slice of chaos along with a clear message about the society we live in.

Vocalist George Garnett explains:
“Divide and conquer is a song about people who are desperate to be middle class. Work themselves to the bone to afford luxurious items in an attempt to appear more sophisticated. It’s less than 2 minutes of straight-up rapid aggro punk.”.

Casey Stead (Bass) continues:
“It mainly highlights the problem of the middle-class living in constant peonism. Working for their own gain rather than for the whole, and perpetuating a system where some will ultimately lose out. All the while, the elite stand to profit from the middle-class. It’s like they’re perfectly possessed.
As one of the first songs we worked on together as a band, Divide and Conquer affirmed for me that George
had a similar world-view, and wouldn’t shy away from abrupt social commentary.”.

Divide & Conquer is available at all good outlets right now, find it on Spotify, Apple Music or your other favourite service. You can also buy the album and assorted merch from the band directly at their store.

Divide & Conquer not only allows Smiling Assassin to bring together their fusion of punk and hardcore, but also their perspective on the world. This is a perfect example of a song being written about circumstances that people can resonate with, with a society becoming more divided, having a voice highlighting the plight, not just of the Millennial, but of everyone.

Josh Rogerson (Guitar) concisely nails the issue:
“Divide and Conquer is a good old fashioned shout about how hard it’s becoming to survive on modern wages and how the gap between the working class and the middle class is getting bigger and bigger.“.

Robbie Johnson (Drummer) created the frenetic lyric video for the track, which in itself saw challenges!
“Personally Divide and Conquer is one of my favourites from the album, it was the first song I remember nailing down and editing the video was a real challenge… I specifically remember hitting George up and being physically angry with him for fitting so many words into a sentence! But now that it’s done that just ads to the chaotic energy this song brings and a lyric video was the perfect choice for it, I’m pretty proud of this one.“.

The debut album from Smiling Assassin, Plight Of The Millennial is available on all good streaming services, check it out at https://listen.lt/SmilingAssassinPlightOfTheMillennial. You can grab your own copy and support the band by buying a physical bundle from the bands directly at smilingassassin.co.uk/shop.

Tracklist
Plight Of The Millennial

Smiling Assassin are a hardcore punk four-piece, formed in early 2019.

The band’s intention is to modernise the punk scene, and to shed light upon some of the issues that young people are facing in 2020.