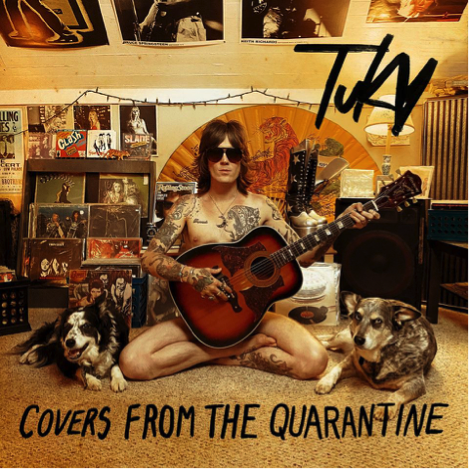 Tuk Smith & The Restless Hearts was due to be opening act for Mötley Crüe stadium tour starting this month before it was postponed to 2021, however, despite this, Tuk is thrilled to announce the release of the new EP Covers From The Quarantine, via Better Noise Music. The release will be available on streaming platforms and can be accessed here.

Because of the Covid-19 pandemic the music industry is now in flux, live performances are on hold, and the music community, as we know it, has been forced to adapt to these new challenges. Covers From The Quarantine is Tuk’s resilient contribution to the music community, throughout the quarantine period he kept creating new material and performing originals & covers for rock lovers with his bi-weekly live-streams.

Tuk comments: “I decided to record some acoustic cover songs in my attic home studio to keep sane during the covid-19 lockdown. These songs and EP are not a representation of who I am as an artist, I just felt like I should try and contribute with something creative and positive in such uncertain times. Also, with all my tours being cancelled or postponed and my album pushed back I feel like it’s important to stay connected with fans. When picking the track list I chose them based off my moods during the quarantine. I recorded this EP without electric guitars and just used acoustic, keys, and some drum samples to make up my one-man band. It definitely gives the body of songs a vibe of its own.”

LA Weekly, in their endorsement of his streamed performances, says: “The guy has a glorious sound that straddles the line between glitter stomp and punk poet“. This is spirit behind Covers From The Quarantine, a collection of Tuk’s favourite tracks recorded in his attic studio, served stripped down to their very powerful core: David Bowie’s Life On Mars, INXS’s Don’t Change, Lana Del Rey’s Summertime Sadness and more.

Each song on the EP represents a moment, a mood of Tuk’s quarantine.He continues: “David Bowie’s ‘Life on Mars’ was the biggest challenge for me to translate. The chord structure and arrangement are pretty unconventional once you open the hood up. It’s always good to push yourself so I enjoyed it. Bowie has continued to be a staple of inspiration for years so thought I’d take a swing at it. Hope he digs it.”

When speaking about INXS’s Don’t Change Tuk says: “I’ve been wanting to cover ‘Don’t Change’ for a few years now live with a band and just never got around to it.”

Another key track on the EP is Lana Del Rey’s Summertime Sadness: “In ‘Summertime Sadness’ I had to change a few words out to be sang from my perspective … listen close and you’ll hear me mention a Rod Stewart hairdo and my Cuban heel boots. This song was way out of my comfort zone and wheelhouse … I still struggle whether or not I should have done it … oh well! Once again, I wanted to challenge myself and see what would happen. At the end of the day a good tune is a good tune. The lyric and feeling of it seem appropriate for the times.”

Tuk Smith bleeds for rock & roll, the kind that stays true to its roots, the kind the classics were built on. After building a career as the frontman for BITERS, Tuk will be launching his solo career with his band The Restless Hearts on his Better Noise debut Looking For Love, Ready For War. Produced by the legendary Rob Cavallo (Green Day, Phil Collins, Kid Rock), the album unifies multiple musical styles and showcases the versatility of Tuk’s songwriting. Tuk Smith & Restless Hearts were set to join Mötley Crüe, Def Leppard and Joan Jett on their epic US stadium tour this summer; however, due to Covid-19 pandemic all touring activity is currently on hold.