Drinking It Up – Matt Stell 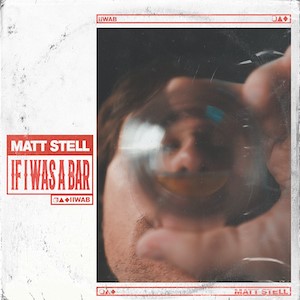 On the heels of his current Top 25 and climbing single, “Everywhere But On,” and his debut multi-week #1 Platinum smash, “Prayed For You,” Matt Stell is also giving fans a brand-new track, “If I Was A Bar” (LISTEN HERE), with the innovative video premiering at 6pm BST today on YouTube Music: https://ms.lnk.to/IIWABmmv.

“If I Was A Bar” is written by Dan Isbell, Zach Kale and Jonathan Singleton and the song is produced by Ash Bowers and Matt.

The singer has stayed creative during the COVID-19 era; Penned Up, his 8-week Instagram-live series, had Matt and fellow songwriters Lindsay Ell, Jameson Rodgers and a weekly special guest, sharing brand-new songs they had individually written that week. Matt was also the first-ever artist to receive a virtual plaque from the RIAA for his Platinum break-through debut single, “Prayed For You.” Stell joins Country Rebel Live tonight, June 12th, at 7:30pm CT (1:30am BST 13/6) for a live stream performance and interview.  He is also the featured guest on the “Surviving The Music Industry” podcast on June 18th.  Fans can catch the in-depth conversation HERE.

For the latest updates, be sure to check out mattstell.com.

Matt Stell is poised for a next-level year after a breakthrough 2019. Milestones continue to add up, with multi-week No. 1 Platinum-certified hit, “Prayed For You” being the ONLY debut artist single to top the Billboard Country Airplay chart (for two consecutive weeks), also notching the top spot in Country Aircheck/Mediabase.  The highly acclaimed track, written by Stell with Ash Bowers and Allison Veltz Cruz, has accumulated 182 million streams and counting and is featured on his Everywhere But On EP.  The year also marked his Grand Ole Opry debut (April 27) and the launch of his philanthropic initiative, the Give A Damn Foundation, raising funds for St. Jude Children’s Research Hospital, Doctors Without Borders, the Humane Society, and more.  Stell made his primetime, network TV debut on ABC’s summer reality series “Bachelor in Paradise” and kicked off 2020 with a performance on “Good Morning America.”

He’s come a long way from playing college basketball for Drury University and making the choice to head to Nashville instead of Cambridge, MA where he was accepted into Harvard University’s Extension School Pre-Med program.

Following his dream of writing and performing, the 6’7” Center Ridge, Ark. native and self-taught vocalist and guitar-player made the move to Music City in 2014, landing a publishing and management deal with Wide Open Music and a record deal with music industry powerhouse Barry Weiss’ RECORDS/Arista Nashville. Stell has received “Ones To Watch” shout-outs from multiple partners, including Vevo DSCVR, MusicRow’s Next Big Thing, The Boot Artist To Watch, Sounds Like Nashville New Country Artist to Watch, CMT Discovery Artist, and YouTube Music Artist on the Rise.