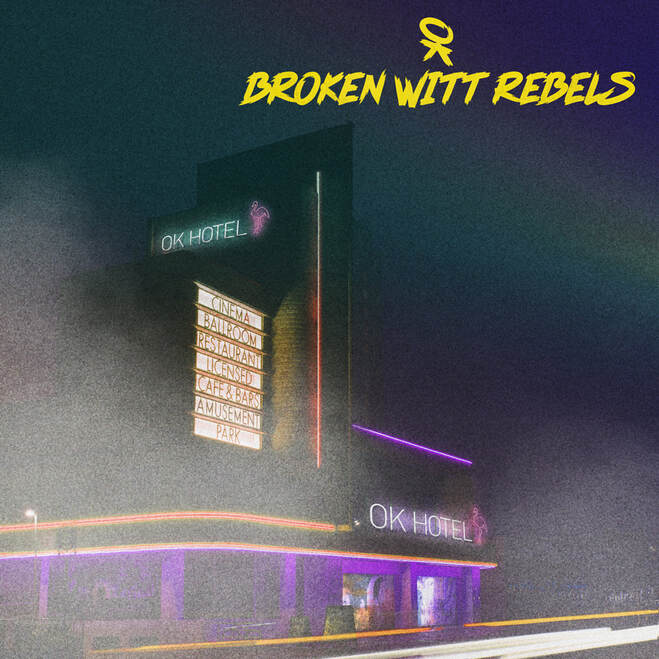 Birmingham’s finest, Broken Witt Rebels, have shared their brand new track, ‘Running With The Wolves’, taken from their upcoming second studio album, OK Hotel, which is set for global release on the new date of March 13th.

Delivering a stunning hit of contemporary, blues-inspired rock‘n’roll, ‘Running…’ is a galloping, flag-flying anthem with an infectious stadium-sized chorus sprinkled with a dose of modern Nashville-meets-cutting-edge-pop flavour; a sonic cocktail that has seen the band dubbed “the Brummie Kings Of Leon”, inspired by the likes of Rival Sons, Kaleo and Alabama Shakes.

Vocalist Danny Core comments, “It’s a song about not waiting for things to happen and taking opportunities when they come up. If you want it, go get it and make your own destiny no matter what the hurdles are. Don’t let anyone hold you back.”

Broken Witt Rebels have strengthened and perfected their identity since their incarnation in 2015, having worked independently across a series of acclaimed EPs supported by headline and support shows in both Europe and the US, taking in a Stateside run with Texan rockers Whiskey Myers plus European dates with Blue October. In addition, the four have appeared at a host of major European festivals – these include Reading and Leeds, Download UK, Wacken Open Air, Camden Rocks and The Great Escape.

The band – James Tranter (guitar), Luke Davis (bass) and James Dudley (drums), alongwith the aforementioned Core on vocals – released their debut self-titled album in 2017, cementing their reputation as one of Britain’s finest emerging guitar outfits. Now as anticipation builds for their 2020 follow-up album, Broken Witt Rebels have also announced live plans for the new year; these plans will see them heading back out for more UK headline dates in March and April, supporting the album release and playing a whole new set of fresh material honed for the 21st century.