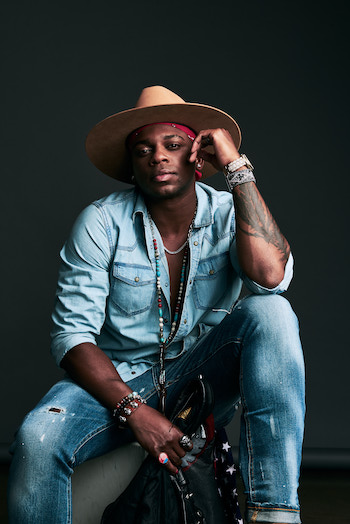 Platinum-selling artist Jimmie Allen has added another major career achievement to his list this week, having been announced yesterday (8/4) as the winner of New Male Artist of the Year at the 2021 Academy of Country Music Awards. Along with New Female Artist of the Year, Gabby Barrett, and over 25 other artists, Allen will perform live at the annual awards ceremony, broadcasting across the US on Sunday April 18th on CBS from three iconic Nashville venues: Grand Ole Opry House; The Ryman Auditorium; and The Bluebird Cafe.

Jimmie’s latest single, ‘Freedom Was A Highway,’ (with Brad Paisley) is currently on the New Music playlist at BBC Radio 2 for a second consecutive week, along with leading UK country stations Country Hits Radio and Chris Country, and is #3 on the Shazam UK Discovery Chart. The single was first featured on Allen’s star-studded collaboration record Bettie James (out now on BMG/BBR Music Group), which has already garnered more than 120 million streams and widespread critical acclaim. NPR called the project “an announcement of [Allen’s] arrival” and a “huge step for Country” while Billboard hailed it “a powerful statement from a developing voice.” Bettie James also landed on several “Best Of 2020” lists, including Rolling Stone, Billboard and Sounds Like Nashville.

On July 13th 2021, the multi-faceted artist will publish his debut children’s book, My Voice Is a Trumpet, with Flamingo Books, an imprint of Penguin Young Readers. Illustrated by veteran illustrator Cathy Ann Johnson, the picture book is a powerful story about speaking up for what you believe in, at any age.