Finding The Power – Escape The Fate

With an infectious chorus about resilience, the track, accompanied by an epic animated lyric video from Toon53 Productions, continues the group’s momentum of high-energy, empowering releases leading up to the full LP. Like the rest of the songs on Chemical Warfare, “Unbreakable” was produced by John Feldmann (Blink-182, Panic! At the Disco, The Used) and co-produced by the band’s lead guitarist Kevin “Thrasher” Gruft. Stream or download “Unbreakable” HERE. Watch the Official Lyric Video HERE. Pre-save/pre-order Chemical Warfare HERE.

“Unbreakable is about finding power in your life rather than just trying to fight your way through circumstances,” the band said. “There’s a theme of triumph and being victorious over the things that used to control you in this upcoming album.”

Escape The Fate have been earning critical praise for the music of Chemical Warfare since this past summer, with the release of the anthemic “Walk On,” which also served as a soundtrack single for the indie  feature Sno Babies (released via Better Noise Films). They followed it up with the Lindsey Stirling-assisted “Invincible,” an energetic, sonic ride about never giving up. And most recently, the band kicked off 2021 with single “Not My Problem,” a soulful, cathartic hard rock offering with Travis Barker lending his drum skills to the track. 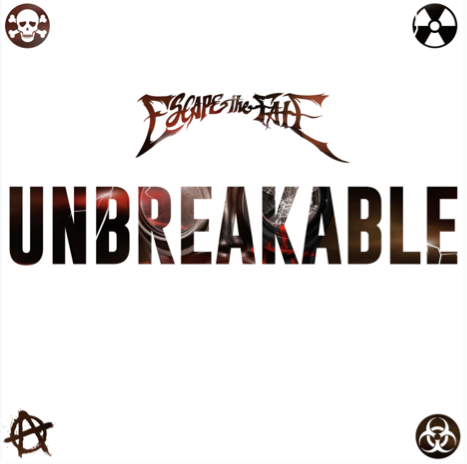 Escape the Fate are one of the boldest rock bands of the 21stcentury. Having spent the past decade-plus of existence doling out memorable rock n’ roll and hooks, the band have moved packed crowds at major international and radio festivals —everything from Rock on the Range to Graspop to Rock am Ring — to the legendary Vans Warped Tour, and while on the road with Five Finger Death Punch, Avenged Sevenfold, Godsmack, Papa Roach, I Prevail, Bullet for My Valentine, Hollywood Undead, and more. Comprised of Craig Mabbitt (vocals), Kevin “Thrasher” Gruft (guitars), TJ Bell (bass), and Robert Ortiz (drums), their past has been defined by decadence, drama, and a retrograde “bad boy” image. They’ve evolved, grown, and, most importantly, grown up. They are going the distance — surviving and thriving in a scene that often cannibalizes its young and seeing their music take on a new, even more dynamic following in the streaming and digital era. With millions of listeners per month and an ever-growing social footprint – the band have received over 700 million combined lifetime streams and views with their music and videos and have over 5 million fans across social platforms.

The Las Vegas-bred group arrived in full force over ten years ago with their 2008 the breakout album, This War is Ours, leading to a major label deal and the rock crossover success of their self-titled sophomore project in 2010. Escape The Fate was produced by hitmaker Don Gilmore (Linkin Park, Korn, Avril Lavigne) and hit No. 1 on Billboard’s Hard Rock Albums and was the first of three ETF records to debut at No. 1 or No. 2 on said chart. Ungrateful (2013) boasts the roaring smash “You’re Insane.” 2015’s Hate Me is defined by singles like “Just a Memory” and “Remember Every Scar.” 2018’s I Am Human marked the band’s second collaboration with GRAMMY® Award-nominated producer Howard Benson (My Chemical Romance, Skillet, Seether) and added fan-favorites Empire” and “Do You Love Me” to the ETF songbook. And now they are ready for their next chapter.

Chemical Warfare, the band’s forthcoming, highly anticipated seventh studio album, slated for an April 2021 release, was produced with John Feldmann (Panic! At The Disco, 5 Seconds Of Summer, The Used) and co-produced by the band’s own Thrasher. It continues the showcase of the band’s unique skill of redefining genre and blending it with their signature hard rock sound, delivering an arsenal of driving bangers and melodic ballads. The critical acclaim of newly released singles with Blink-182’s Travis Barker and violinist Lindsey Stirling are a testament that Chemical Warfare is the sound of a band at their most powerful, most resilient, and most comfortable in their own skin.