Not Quite Bop Pills – Pabst 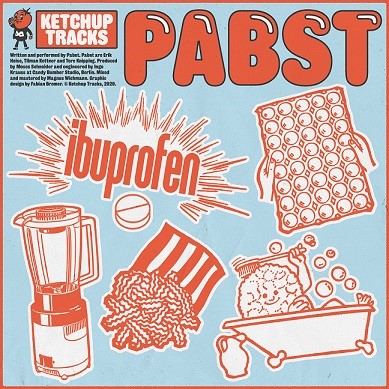 After releasing the critically acclaimed debut album ‘Chlorine’, playing too many gigs to count, making numerous raucous festival appearances AND supporting the likes of Bob Mould (Hüsker Dü) and Kadavar on tour, Pabst are getting their next kick in the form of new fuzz-indie-punk-cocktail: ‘Ibuprofen’.

It’s accompanied by visuals reminiscent of classic ’90s MTV music videos with pastel-grunge scenes, directed by Constantin Timm. Fast, wild, and colourful, it will no doubt awaken memories of that last session in your hungover head.

On the track, the band explain:
“Ibuprofen has always been and always will be our drug of choice, so this song is our tribute to it. We hope it makes you feel as GUT as Ibuprofen.”

‘Ibuprofen’ is the first teaser of the band’s upcoming second album that will be released in the summer of 2020. The band is currently in the studio working with producer Moses Schneider (Kreator, Beatsteaks, AnnenMayKantereit) to finalise the recording. And while we have to wait for more bangers from the Berlin band, they have confirmed that the album will be released on the band’s own label ‘Ketchup Tracks’.

Live, Pabst started their year with an impressive set at Eurosonic Norderslaag in Groningen, Netherlands. After more than 30 festival shows in 2019, numerous support and headline tours, it was only right to let the European public see what a beast the band is on stage! Between March and April the band will be supporting ITCHY on tour in Germany, Austria, Switzerland and Czech Republic before playing as many festival stages as possible over this summer.

In autumn, the band will embark on their first European headline tour in support of their second full length album. The band has teamed up with X-Ray Touring for this, and in Germany the band will continue to be represented by DQ Agency.

Fancy a taster of what it’s like to see Pabst live, now? Check out this snippet from Casper’s ‘Zurück zu Hause Festival’: https://youtu.be/5VYTV8QiZzM