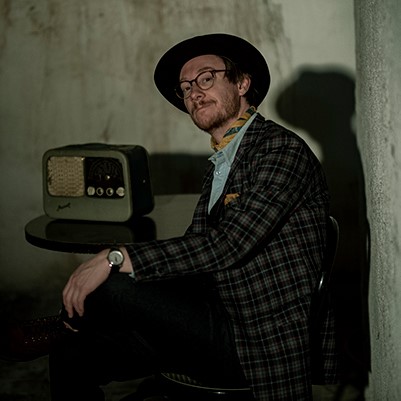 Adam Douglas is a playmaker in the best sense of the word. His music is intended to be played to people. He savours every moment on stage and values every opportunity to connect with his audience.

Raised in Oklahoma, USA, Douglas lived in Chicago and Minneapolis before finding his way to Norway where he has lived for the past decade. Now considered one of the best guitar players in Norway, he made his first stage appearance aged 8 and soon made the stage his home, a place to share his magnificent voice with his honest and revealing songs. Drawing influence from Howlin’ Wolf and Ray Charles’ flirt with country, to Tom Petty and Bonnie Raitt, Douglas has found a sound that combines the best of soul, gospel, jazz, rock n’ roll, rhythm n’ blues, and roots music.

As a musician, Douglas is an unexpectedly shy guy who turns into a firework on stage. He lets his big voice compete for attention with his guitar for an electric live show which is never the same twice. Most comfortable when he’s the worst musician on stage, Douglas sought out a band who could keep him on his toes and perform best with them breathing down his neck, preferably with a choir on one side and a horn section on the other.

Since living in Norway, Douglas has found inspiration in the Norwegian mountains and fjords and has released 3 albums to critical acclaim. He has performed extensively across the country on solo tours and supported Sting at Kongsberg Jazz Festival and Bonnie Raitt at Olavsfestdagene in Trondheim. In 2017 he won Stjernekamp (Battle of the Stars) on Norweigian national television and became the first artist to do so with his own original song. Although Douglas had already been a household name with blues fans for some time, he sang his way into peoples’ hearts by remaining true to himself throughout the genre-splitting competition.

Hot on the heels of his 2020 singles Joyous We’ll Be and Change My Mind, Douglas exposes his own vulnerability with his brand new single Into My Life. With his lyrics he rejects society’s idealised vision of masculinity, the expectation that a man should be strong, steady, and most importantly, should not cry. Instead Douglas portrays the real struggle that many men experience with their mental health and how a midlife crisis often goes deeper than they express.

To be a man in a midlife crisis is often underestimated as an identity search and a need to challenge one’s own boundaries, but what is all too often overlooked is the extent to which men’s own mental health can be stretched to breaking point. On his way out of his thirties, Adam Douglas is fast approaching midlife crisis territory himself and insists on drawing attention to the experiences that men can face but don’t always discuss. Douglas wrote Into My Life with fellow artist and friend Cory Chisel to encourage men struggling with pressures of aging to feel more comfortable to speak out about the anxiety and depression that ensue.

“We have both become very aware of our own mental health, how it functions, how it doesn’t function, and how it can affect our lives and the lives of those around us. We’ve gone through a sort of middle aged mental health awakening.”

For both co-writers, Into My Life is about accepting darkness and depression, whilst feeling reassured in the fact that many other people are tackling similar feelings that can manifest at different points of their lives. Having grappled with his own hard times brought on by the pressures of expectations and being overworked, Douglas hopes that Into My Life will go some way in encouraging more men to work on opening up about their feelings and talking about their mental health.

“You have to fight your way through it and it’s fully possible to get back on your feet, even though it doesn’t feel like it when you’re in the middle of the tug of war with yourself. The most important thing is to have people around you who you can talk to, and that’s especially important for men who traditionally don’t talk about their feelings with others.”

Into the Light comes ahead of Douglas’s forthcoming album, which will be his third studio album. He is in great shape and hopes to encourage a brighter future with his music. “I’m not trying to be anybody but myself. I’m just Adam Douglas, maybe with a new hat once in a while.”