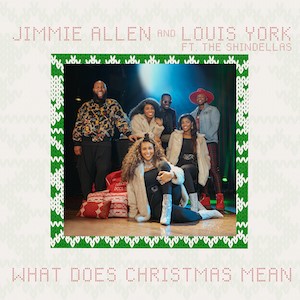 Platinum-selling recording artist and songwriter Jimmie Allen is officially kicking off the holiday season with his good friends Louis York and The Shindellas as their festive doo-wop ditty “What Does Christmas Mean” is available everywhere digitally now – LISTEN HERE.

Allen, Louis York and The Shindellas are slated to perform “What Does Christmas Mean” at the upcoming 93rd annual Nashville Christmas Parade, which will air virtually on December 5th at 9am CST / 3pm GMT on ABC Nashville and will be syndicated nationwide in the weeks following. The parade is produced annually in support of Monroe Carell Jr. Children’s Hospital at Vanderbilt.

“We look forward to this time of year to share our favorite Christmas song with the world. This year is extra special because we get to do it with our good friend Jimmie Allen,” states Louis York. “After such a crazy year, it’s important to celebrate and find joy however we can. The magic between Jimmie, The Shindellas, and us is just what the world needs. We hope that this Christmas jam will make you dance!”

“Adding Jimmie’s flare to this modern Christmas classic is like putting the star on top of the Christmas tree,” The Shindellas add. “This song is guaranteed to get you out of your seat and on your feet for a good ole time!”

JIMMIE ALLEN: Signed to BBR Music Group’s Stoney Creek Records, multi-talented, platinum-selling recording artist and songwriter Jimmie Allen made history as the first Black artist to launch a career with two consecutive No. 1 hits on Country radio from his 2018 debut album Mercury Lane. Allen was most recently nominated for “New Artist of the Year” at the 54th Annual CMA Awards – his first ever CMA nomination – and performed on the show, creating a historical moment with one of his idols and collaborators, Charley Pride. In July, Jimmie released Bettie James, released in July, is a star-studded collaboration EP featuring Brad Paisley, Pride, Darius Rucker, Mickey Guyton, Nelly, Noah Cyrus, The Oak Ridge Boys, Rita Wilson, Tauren Wells and Tim McGraw. His current single “This Is Us” with Cyrus is Allen’s fastest consuming single to date, garnering 51 million streams and counting.

Allen performed twice on the highlights of the 2020 CMA Awards, broadcast yesterday (19/11) on BBC 4, and available to watch again here.

Louis York is the powerful duo and creation of multi-GRAMMY nominated songwriting and production team, Claude Kelly and Chuck Harmony. Kelly, a 4x Grammy Award nominee, and Harmony, a 3x Grammy Award nominee and 2011 NAACP Image Award winner, both together and apart have written and produced hits for a long list of multi-platinum recording artists including Rihanna, Bruno Mars, Miley Cyrus, and Whitney Houston to name a few. Formed in 2015, the duo first appeared on the scene with their well-received debut EP trilogy Masterpiece Theater: Act I, Act II, Act III.  The projects earned praise from publications including Billboard and Los Angeles Times for their genre-bending sensibilities and creative aesthetic. Having been described as a cross between Outkast and Earth, Wind & Fire, the pair have unleashed their full-length debut, American Griots – The Album. An ambitious step forward for the group, the new project consists of 13 new songs. This work of art expresses both Kelly and Harmony from the inside out as the album covers themes of love, wellness, and happiness.

The Shindellas, a Nashville-based band encompassing three brilliantly talented women Kasi Jones, Stacy Johnson, and Tamara Chauniece. With no lead singer, each woman shares the spotlight equally. The Shindellas introduce a unique genre of music to their audience composed of jazz, soul, and true R&B. These women are proponents of elegance, empowerment, and self-love that they spread through their music. The Shindellas have been highlighted by NPR, appeared at the ESSENCE Festival of Culture, performed at the TEDxNashville Women, and have toured the country performing with Louis York. Earlier this year, the trio released their first EP Genisis (Click Here).