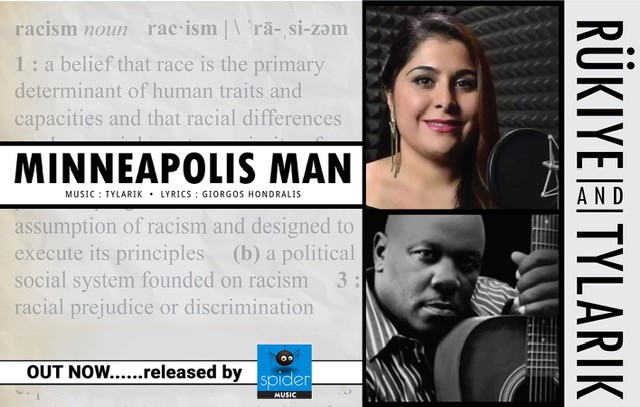 Recent events in the USA amplify similar events on the rise across the globe that show one of the worst traits of human behavior:

The firm belief that one group of people are somehow superior to another. Personal identity beyond that of fellow man or woman is leading to prejudice, discrimination, silent resentment and even hostility as one group seeks to lower the value of another. As this is a global problem and a global story, we believe it is only fitting to have a global collaboration to tell the story.

You will hear two voices in this song: Rükiye and Tylarik. Rükiye is a well-established artist with six album releases and her songs have well over a million hits on social media where her beautiful melodic range can be heard in four different languages — English, German, Greek and Turkish. She also just happens to be the German-born daughter of Turkish parents who lives in Germany.

When you hear Rükiye’s voice, you must know she is singing from the heart as she tells the story of this song. Tylarik, who joined Spider Music last year, is a Southern Soul Music award winner and multi-talented entertainer — actor, singer, songwriter. He wrote the music you will hear. He also just happens to be a recently retired law enforcement officer, a Deputy Sheriff from Texas, and a Black man. When you hear Tylarik’s voice, you must know he sings from the heart as he tells the story of the song. And of course, it is not a story unless there are words, and the lyrics were written by Giorgos Hondralis, a true renaissance man. Giorgos is a published poet, a lyricist whose name can be found on countless songs and album releases worldwide, and is a health professional with a thriving practice caring for others. He also happens to be a Greek living in Germany, who gives of his personal time to his city government, which makes him a keen observer of local and world events.

Armed with a skill for creating meaningful prose, you know Giorgos wrote from his heart to tell this story. Now you know the story behind the story of the song: a heartfelt international collaboration, masterfully mixed with care and attention in Athens, Greece, the world’s birthplace of the knowledge and reason that led to democracy and the belief that we strive for today: it doesn’t matter who you are, where you come from, or how you identify yourself, all of us are equal, and no person is better than another. Listen to this new music. Share it. Art has a helpful way of reminding us what we know to be true, but sometimes forget: we’re in this together.