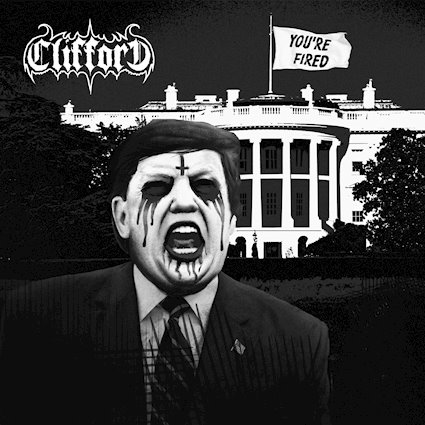 From the label that gave you the metal version of Greta Thunberg‘s United Nations speech “How Dare You” and CLIFFORD‘s metal tribute to another great Swedish personality, some even say he should be named ‘Swede of the year’; the state epidemiologist of Sweden Mr. Anders Tegnell.

“You’re Fired! (By a Lot)” tells the story of one man’s fall, all the way down from his very own Trump Tower golden escalator, to the parking lot of a landscape decorator, a cremation center and an adult bookshop (with viewing booths, supposedly for the avid reader).

Heavy metal’s premiere contemporary analysis duo CLIFFORD returns with this blistering track, recalling and dissecting a fraction of the madness that emanated from this man over the past four years.
We bring you the two brothers behind the band CLIFFORD who released their debut single ‘All Makt åt Tegnell‘ (Swedish version) in May and it’s organically exploded with over 25 000 views on Youtube, getting airplay and discussed on Sweden’s largest morning show on national public radio ‘P3 Morgonpasset‘ and getting press coverage from Swedish music magazine GAFFA and Aftonbladet. Thanks to the success, the Clifford brothers signed a record deal with Despotz Records.

With this varied palette, Clifford steps forward and delivers their version of contemporary analysis – with pure hard rock. The official lyric video for “You’re Fired! (By a Lot)” is out now, and will be followed by a digital single in the days to come for streaming/download.