Step Into The Darkness – Mauri Kosonen 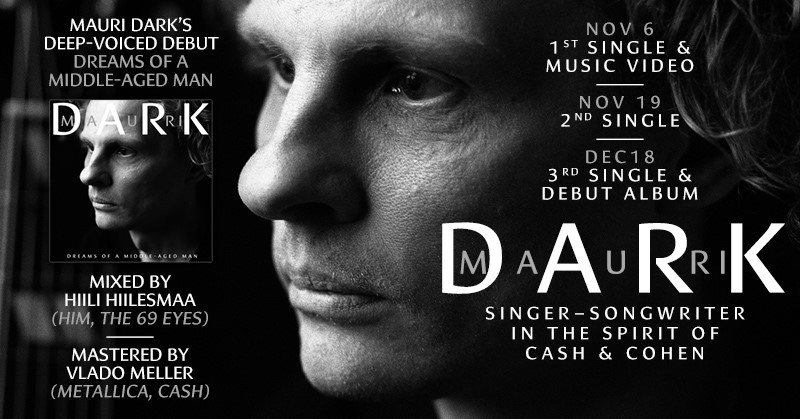 First single and music video “Dreams Of A Middle-Aged Man” is to be released on Friday, November 6, 2020. The video was directed and filmed by Vesa Ranta, known for his videos for metal bands like Dark Tranquility, Amorphis and Sólstafir.

“Dreams Of A Middle-Aged Man” music video tells a story of an aging couple having a hard time letting go of their only daughter who is moving away from home. The fictive family dad’s motorcycle and imagination fly the viewer to scenic landscapes of Senja Island, Northern Norway. Mauri Dark and his two-year-old daughter are also seen in a burnt house and forest in Oulu, Northern Finland.

“We wanted to tell a realistic story that would resemble a dream. The music video depicts midlife anxiety when the core family goes through changes. Director Vesa Ranta’s vision of Nordic darkness and mentality, known from his metal music videos, creates an interesting visual blend with my music”

The upcoming debut album Dreams Of A Middle-Aged Man was written, produced, recorded and performed by Mauri Dark.

“The single “Dreams Of A Middle-Aged Man” is an autobiographical daydream from changing baby diapers to riding a motorcycle in The Lofoten Islands, Norway,” Mauri Dark says. “When you dream, you go to a beautiful place inside your mind, like in the end of that song. Dreaming is a state of mind where you are free.”

“I made the songs and lyrics for my debut album amidst the changes of breaking up from a 7-year relationship, my mother’s death of cancer, and finding happiness again, getting married, having a firstborn daughter and making music,” Mauri Dark describes the album writing process.

The album Dreams Of A Middle-Aged Man has a solid foundation of Mauri Dark’s experience: 25 years of songwriting, 8 albums, and 500 shows with different bands and instruments. Strong compositions and lyrics are led by Mauri’s deep bass voice and accompanied by fingerpicked acoustic baritone guitar, and their moods and soundscapes vary. The atmospheric, discreet backgrounds are built with acoustic instruments such as piano, pump organ, cello and upright bass but also with electric guitar ambience (á la Pink Floyd, Ennio Morricone’s Western soundtracks, blues and jazz), and acoustic drums and electric bass on two tracks.

“Dreams Of A Middle-Aged Man is a dream come true record,” Mauri Dark says. “It combines everything I have learned about music and life in the past 25 years. It is emotional, honest, sincere and timeless acoustic album full of moods and stories in the spirit of Johnny Cash, Leonard Cohen and Nick Drake. I made it with the best professionals and simply for the love of music.”

Dreams Of A Middle-Aged Man album is to be released December 18, 2020 via EluccaArts in digital, CD and vinyl formats.

07 Hymn For A Wanderer

10 Dreams Of A Middle-Aged Man