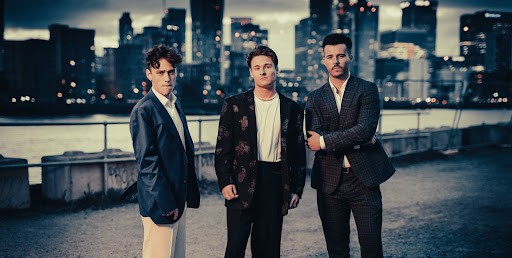 With a sunny, funk-tinged blend of laid-back grooves and a glimmering guitar-pop sounds, “Joy Ride” is a joyous earworm that refuses to take itself too seriously. Of the new track, Wild Horse explain:

“”Joy Ride” is an ‘80s inspired RnB/funk/pop song and our most ambitious to date. It’s now quite common for artists to try too hard to have overly deep meanings to songs, we just wanted to put out a song that people could have fun while listening to and not have to think too much about its lyrics. Essentially, it’s about car sex.”

Drawing from an abundant range of influences including Arctic Monkeys to The Beatles, Bruno Mars to The Jackson 5, this strutting new cut manages to fall somewhere between them all. Written by frontman Jack Baldwin amidst an at-home “writing frenzy” in 2021, its playful rhythms have already proved a hit when trailed at their live shows and with dedicated fans of the band alike. They add:

“We sent a small group of our hardcore fans, “The Listening Group”, several demos to critique to help us decide what to release next. “Joy Ride” was high on the list. We hope they like what we did with it, and we think they will.”

Having played together for over six years and with five albums and three EPs under their belts all while still in their early 20s, Wild Horse formed in Sussex by brothers Jack and Henry Baldwin and primary school best mate Ed Barnes. After relentlessly gigging since their teens, the band have gained support from BBC Introducing, Radio X amongst others, landing several BBC Introducing Track of the Day slots and enthusiastic reviews from a range of publications including BN1 Magazine, Sussex Scene, Eclectic Music Lover and LA Buzz Music.

With the band’s previous single  ‘Coffee In The Morning’ dubbed “a sensational track from one of the hardest working acts around” by BBC Introducing, Sussex Scene praised the band’s live show saying: “they have such a mixed bag of material to draw from. It was a non-step set of such diversity; really something quite special and unique. These guys will keep you on your toes.”

Now armed with a string of new tunes ready for release this year, Wild Horse are continuing to relentlessly write new material and rehearse for their high energy live shows that promise to have every member of the audience up and dancing.