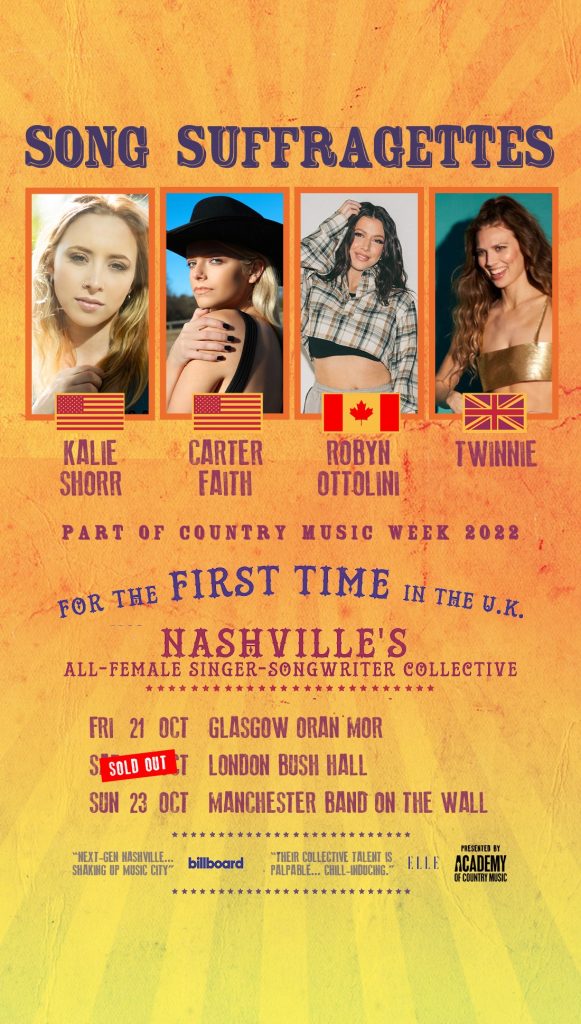 NASHVILLE’S ALL-FEMALE COLLECTIVE, SONG SUFFRAGETTES, MAKES ITS WAY TO THE UK FOR THE FIRST TIME.

Nashville’s all-female singer-songwriter collective, Song Suffragettes, is making its way to the UK for the first time later this month as part of Country Music Week. With shows in Glasgow, London and Manchester, presented officially by the Academy of Country Music, it will feature founding member Kalie Shorr alongside Carter Faith, Robyn Ottolini and Twinnie. Full dates can be found below, and tickets can be bought here:

Born in 2014, Song Suffragettes has taken place every Monday night at The Listening Room Café in Nashville, Tennessee. In its eight years, the collective has showcased more than 380 talented women out of over 2,000 who have submitted to play the show. With weekly sell-outs, it vocally combats widespread discrimination against women in the music industry by giving female talent a place to play, grow and evolve with fellow creatives.

Since its inception, 26 Song Suffragettes women have gone on to receive record deals and 60 have landed music publishing deals. With almost 5 million views on their YouTube channel, Song Suffragettes was named by Billboard magazine as one of “Next-Gen Nashville: 16 People, Places and Things Shaking Up Music City”.

“Coming up in Nashville as a teenager and a young adult with this community of women who are so motivated to support each other and change the culture surrounding it, made me such a better woman in the long run” said founding member Kalie Shorr in conversation with Forbes. “I don’t know who I would be as an artist without Song Suffragettes, and just as a person.”

In August of 2020, Song Suffragettes partnered with the Women’s Suffrage Centennial Commission – funded by US Congress – to celebrate the 100th Anniversary of the ratification of the 19th Amendment with special shows featuring Maddie & Tae, Lindsay Ell, Runaway June and Ashley McBryde.

Featured in The New York Times, Forbes, ELLE, USA Today, Washington Post, Grammy.com, Boston Globe and on PBS NewsHour and NPR, Song Suffragettes continues to fight for female talent to be heard throughout the US and beyond.

“Essentially, we’re working toward a larger ‘window to the world’ so that more female-crafted music can be heard” explained Song Suffragettes founder Todd Cassetty.