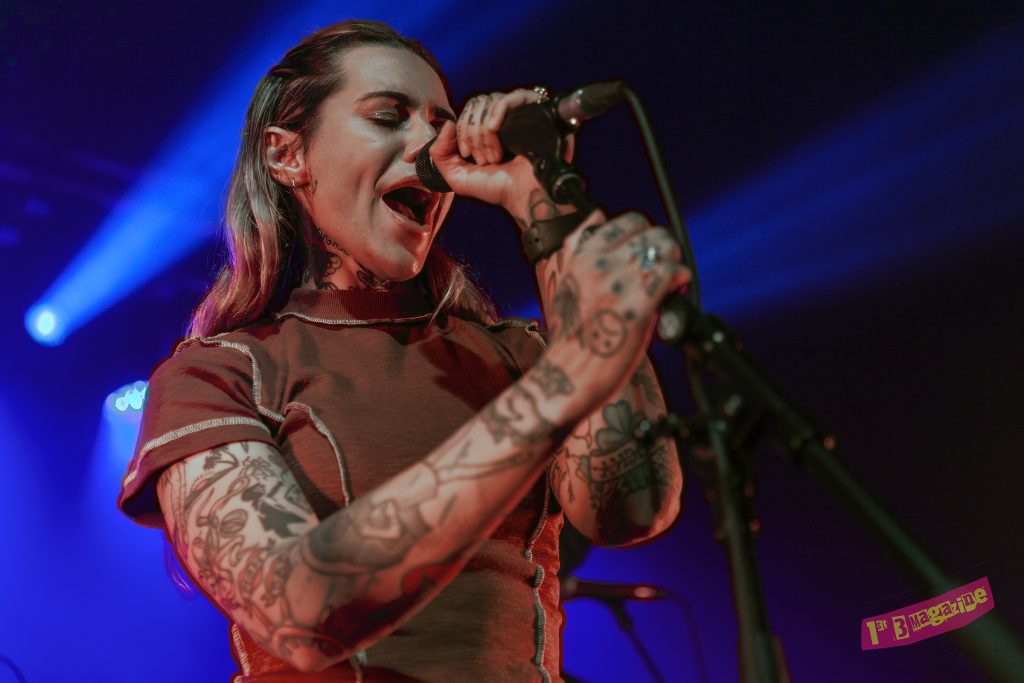 Wade has seemingly fast forwarded through life. Surely the pills and booze should come after the fame and fortune, yes?

At a still tender age, her old soul is able to forge a path forward by writing and singing about such things others may take a hiccupping lifetime to experience. The story is out there for all to see. Morgan Wade has quite publicly confronting her demons and vanquished them to the back seat of that rocket-ship-cadilac whilst she takes the wheel for a roller coaster rock and roll ride.

It was Wilder Days that sent a splintering karate kick at the creaky old doors of country music, doors that seem to occasionally open up a crack, only to then slam back shut. The song, lyrically and musically, drew you in a little like That’s All Right (Mama) might have drawn folks in nearly seventy years ago in 1954.

Queueing for Morgan’s Monday evening show at The Garage, Islington, we found Kylie. She was all the way from Texas and heard Morgan Wade’s songs pushed out on the local radio as “ A hot new artist”. Kylie summed things up in a statement that, once again, could almost have been made during those early days of the birth of rock and roll.

She’s not like any other country artist. She doesn’t have the country look, she’s covered in tattoos- she’s inclusive, her own style and that’s a rare thing. She doesn’t cover anything up- on her body or in her soul. She lets it all show and includes us in the experience”

Penny “I saw her at C2C Festival (she reminded me of Reba Macyntyre) and then saw she would be playing here (at the Garage)- she’s very unique, very special- she is more than just music”

David had brought his (grown up)children to the gig, having seen Morgan on youtube, on a Gibson garage demo, while Chris and Sara had heard her on Bob Harris’ radio show six months previously.

Chris; “She’s excellent- I saw her at C2C and wanted to hear more, see more- she has a different voice .”

Some fans had made their own personalised t-shirts- Sophie told us how she had had her favourite photo of Morgan printed especially for this evening.

a defiance of genre"

The Garage, beautifully warmed up by Leah Blevins and now ever-so tightly packed to capacity, sees Morgan’s band come out and tune up, and then, ever so coolly and unassumingly, Morgan steps out and takes her place, centre stage, a diminutive, jeans and t-shirt-clad girl with her long, wavy dirty blonde hair held back from her face by kirby grips. And then, a tiny bit nervously, it begins..

“Are you coming tomorrow night too?” she tentatively asked, to a resounding, “YES!”

With a warm intensity, Morgan Wade picks up her red guitar and opens her set with Reckless, the title track from her celebrated debut solo album of the same name. Her gorgeous, heartfelt Country voice is just enchanting. This was followed by Last Cigarette and Don’t Cry, a heavy rock beat and vintage vibe merging flawlessly with her honeyed vocals to create a sound all of its own- a defiance of genre- a mixing of styles from which she has conjured magic.

The pace quickens as she sings Bad Karma (a Miley Cyrus cover) and Mend, and it is now that Morgan allows herself a small smile. The appreciation and adoration of the audience is impossible to ignore, and Morgan talks a little to us, telling us of that day’s trip to Stonehenge (where they didn’t actually get beyond the gift shop). And this is what’s she’s all about, really; a heart-breaking honesty, looking your troubles head-on, accepting them- this, her strength to change.

The conversation a natural pause, the mood changes and Morgan sings four emotion-filled songs from ‘Reckless’- Dirt Settles, Take Me Away, Matches and Carry Me Home and here the fans know every word. You know you’ve made it when everyone is singing with you- feeling it with you- the words you’ve written held in the hearts and minds of strangers from half way across the world.

Morgan has a way of making every word matter- and her timely cover of Elvis’ Suspicious Minds communicated raw emotion and heady intensity. Morgan continues telling her story with Northern Air, Run, a mash up of Your Love and Jessie’s Girl  followed by The Night giving opportunity for her talented guitarists to show their virtuosity in several solos, complete with picks thrown to lucky recipients.

Yep, Morgan Wade has a story to tell…and she is the ultimate storyteller. Tonight’s chapter ends with another Elvis nod in ‘Met You’ and arguably, everyone’s favourite, ‘Wilder Days’. The audience are happy- a big, powerful euphoria pervades; strangers are smiling, couples are dancing, a real feel-good vibe. Such is the power of the joy of music transforming us into part of something entire on this warm, serendipitous June evening in London Town.

Not to be reproduced without prior permission.

Social media use only for persons depicted, event organisers and venue.