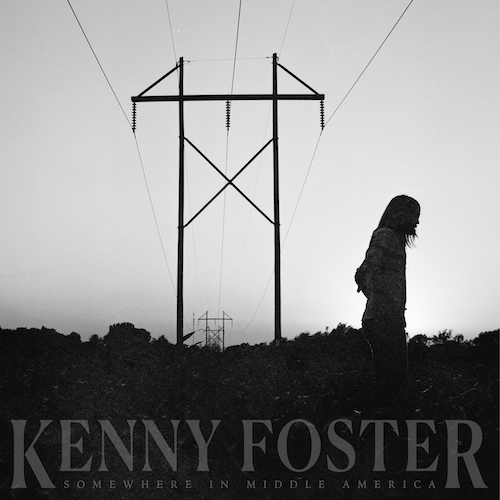 On Somewhere in Middle America, Foster addresses the beauty and the limitations, the experiences and the challenges, facing those Midwesterners who, like him, carry a complicated relationship to their hometowns and the polarising mindsets that increasingly define our times.

Born and raised in Joplin, Missouri, the acclaimed and innovative artist didn’t set out to make this complex and deeply personal territory the focus of the record, but gradually became aware of what was feeling most urgent to him.

“The nice thing about where I’m at in my career is that I get to let things accrue until it makes sense,” he says. “I write five days a week, all the time, so my projects come out of the sorting of the songs after the fact – I’m not reaching for something, it’s just what’s coming out naturally. And this theme was something I really needed to say.”

The results merge country storytelling, singer/songwriter intimacy, and rock & roll intensity—the place where pedal steel and banjos meet power chords. Foster grapples with the struggle between ambition and reality in songs like ‘Dreams Change’ and ‘Farmer’, and wrestles with his attachment to old-school values in an advancing society in ‘For What It’s Worth’, presenting himself as “a long-form man in a sound-bite world.”

Growing up singing in church, Kenny never thought about making music his life’s work until he saw one of his cousins play some Led Zeppelin covers at a family gathering. “That was when the light bulb went off,” he says. “In the Midwest, we love film and TV and literature, but nobody ever put together that they could actually be one of the people on those posters.”

As a philosophy major at Missouri State University, he fell in love with the emo and alternative rock of Get Up Kids and Third Eye Blind, and had a revelation at a Dashboard Confessional concert.

“Hearing everybody sing the songs back to Chris Carrabba was incredible,” he says, “because it felt so much like my story, but it was their story, too. But I also realised ‘Oh, I think I can do that.’ “

Foster transferred to Belmont University in Nashville, and after graduating, he worked in and around the music scene while continuing to write songs and release them on his website, culminating in the 2008 release For Now. After a storm ravaged Joplin in 2011, he responded with the moving benefit single ‘Hometown’.

As Foster continued to grow as an artist and dive deeper into finding his voice as a songwriter, he crafted a unique and very personal sense of his artistry – this all culminating in the release of his critically acclaimed 2017 album, Deep Cuts. The record expanded his reach further than even he could imagine and found a global audience, performing in 18 different countries in the years following.

This year alone, while preparing for the release of his new music, Kenny has toured the UK, hosted an international songwriter’s round at CMA Fest, and signed with leading live agency UTA for global representation.

“When I moved to The South from the Midwest I realised very quickly that they had an entire ubiquitous culture down here, one that felt unifying and kinda desirable to want to be a part of. I think that’s part of country music’s allure,” he shares. “But Middle America is its own thing altogether.

“How do you sing about folks that kinda keep to themselves, complain very little, and live these sweet microcosmic lives? Those are my people. Wherever in the world they are, I’d like to think my music meets them there. Somewhere in Middle America.”

Somewhere In Middle America is available worldwide on all major streaming/download platforms now.