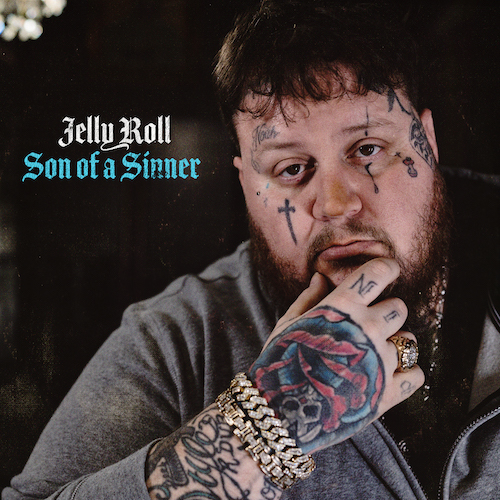 JELLY ROLL SCORES FIRST US COUNTRY RADIO NO. 1 WITH DEBUT SINGLE ‘SON OF A SINNER’.

No. 1 hitmaker and multi-genre phenomenon Jelly Roll scores his first No. 1 on US Country radio, as his debut Country single ‘Son Of A Sinner‘ sits at the top of the Billboard and Country Aircheck/MediaBase charts.

Following a massive, history-making year that included selling out Nashville’s Bridgestone Arena, making his Grand Ole Opry debut, scoring his first Country radio No. 1 and two-week Rock No. 1, and releasing his label-debut album Ballads Of The Broken on BMG/Stoney Creek Records, the Antioch native has more than “cemented his rising mainstream stardom” (Tennessean). Amassing more than 4 Billion career streams, Jelly Roll’s ‘Son Of A Sinner’ continues to dominate Billboard’s Emerging Artist chart for an astounding 20 straight weeks – marking the second-longest reign ever on the chart.

Written by Jelly Roll with fellow Nashville native ERNEST and David Ray Stevens, the Jelly shared with Billboard his appreciation for his first #1 single at Country radio, noting “There is no greater reward for a singer and songwriter in Nashville, Tennessee than to have the #1 song on Country radio. Now, imagine that happening to a guy that grew up in this town…a guy that, at every turn the first 25 years of his life, made the wrong decision. Imagine everyone telling that guy he had no chance at Country radio.

‘You’re too overweight, you have too many tattoos, they will never let another convicted criminal on Country radio’ – now imagine Country radio proving everyone wrong and taking the chance on the song, the message and the man. If you can imagine that, then you can understand why I’m so filled with gratitude as tears stream down my face while I type this: I currently have the number 1 song on Country radio. Thank you, Country Radio and all the Streaming Partners, for making ‘Son of a Sinner’ my first #1 at Country radio. I vow to never let you down or forget the chance you gave me when everyone told you not to! I want to take a second to thank my label STONEY CREEK AND BMG — Loba and his misfits — y’all took the biggest chance. Every label in town told me I had a better chance signing with a label in LA than to ever have a chance in this town with my history — not only did that not scare BMG, it made them want to double down and go all in!”

Last year ahead of his sold-out headlining date at his hometown venue, Bridgestone Arena, Jelly also shared with Billboard, “I want to keep making music that helps people,” and detailed the behind-the-scenes process of his song, ‘she’ the soul-stirring ballad that brings the hidden perils of addiction into the light. Quickly resonating with fans, ‘she’ encouraged people through the music video and Jelly’s partnership with Shatterproof to seek help with addiction and mental health. Watch the powerful video for ‘she’ HERE.

Jelly’s next release from his highly anticipated forthcoming album will be ‘NEED A FAVOR,’ which dictates “the internal fight between faith and vices” (American Songwriter), impacting US radio 13 February. Ahead of its official radio release, the video for ‘NEED A FAVOR’ will premiere this Friday, 13 January, on YouTube, along with a live stream after party for fans HERE.

fter independently building his own fanbase, the past year has marked Jelly Roll’s biggest to date. With his two-week rock No. 1 ‘Dead Man Walking’ – his first No. 1 ever as an artist or songwriter – Jelly became the first act this decade to top the Rock charts while simultaneously having a Top 30 song on Country radio (‘Son Of A Sinner’), and he is the first artist in Billboard history to do so with debut singles. It was also just over a year ago that Jelly Roll signed with BMG and sold-out the Ryman Auditorium in under an hour, prompting an immediate invitation to the historic Opry to make his debut.