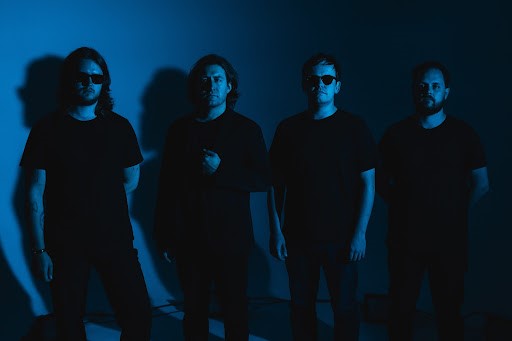 Before we wave adieu to 2022 – IST IST – pause for reflection with the philosophical: “Mary In The Black And White Room”.

A reminder of their keenly-anticipated third album ‘Protagonists’ (slated for Spring 2023 via Kind Violence Records), the track finds the band revealing one of its most cerebral, synth-driven moments.

With shades of classic OMD, The Cure and New Order, “Mary In The Black And White Room” effervesces in the darkness with its potent blend of layered synthesisers, darting basslines, and labyrinthine lyrical intrigue.

“Mary…” is inspired by a thought experiment proposed by the philosopher Frank Jackson that has since become known as ‘the knowledge argument’ (or ‘Mary’s room’). Hypothesising the work of a scientist called Mary, who exists in a black and white world where she has extensive access to physical descriptions of colour, but no actual human perceptual experience of colour; Jackson’s theory wonders whether Mary will gain new knowledge if she actually experiences seeing colour.

“Mary in the Black and White Room is about trying to figure out if experience trumps knowledge. See ‘the Knowledge Argument’ where the subject, Mary, exists in a black and white world but has extensive descriptions of colour, but you don’t know if she knows what they actually look like until exposed to it. Really interesting stuff.”

Absorbed by themes explored in Jackson’s theory of physicalism, IST IST create an unconventional love-song-of-sorts. As if reaching out from another dimension, frontman Adam Houghton delivers a cascade of cryptic couplets and non sequiturs in his rich baritone, looking to add colour to a world that could be so much more than monochrome.

The single arrives with an official lyric video created by Shaolin Pete, which elegantly reflects the themes explored in “Mary in the Black and White Room”. Watch it here: https://youtu.be/7gz0WAVnROo

“Mary…” swiftly follows the Mancunian post/punks’ insurgent comeback single “Stamp You Out” and the announcement of their upcoming new LP ‘Protagonists’, which will be released on 31 March 2023

An album all about new beginnings, with a nod to the trials and tribulations of love, tricky family relationships and the feeling of being trapped by the past, ‘Protagonists’ arrives as an attestation to a band sure of their own identity. Owing its title to songwriter Adam Houghton’s magpie-like method of writing, the album places prominent characters, fictional and non-fictional, into dystopian worlds with new and uncertain outcomes.

Speaking about the album Hougton explains:

“My process has always been taking inspiration from everything around me including but not limited to TV, Books, Movies, Newspaper, Articles on Wikipedia, Crime Documentaries etc. I then use these sources to craft fictitious stories around an imagined persona. The title ‘Protagonists” seemed to work with this method.”

Blurring the lines between fantasy and reality, while traversing a broader spectrum of genres and sounds than ever before, ‘Protagonists’ will provide plenty to pore-over for fans new and old. Recorded and mixed by Michael Whalley and IST IST at Milkshed Studios, the album was mastered by the legendary Greg Calbi and Steve Fallone at Sterling Sound (The National, Yeah Yeah Yeahs, Interpol).

To mark the release, IST IST will be playing a special hometown launch show for the new record at the Manchester Ritz in March next year, followed by a full headline tour of the UK and a set at Whitby’s Tomorrow’s Ghosts Festival in April. Dates and details below: 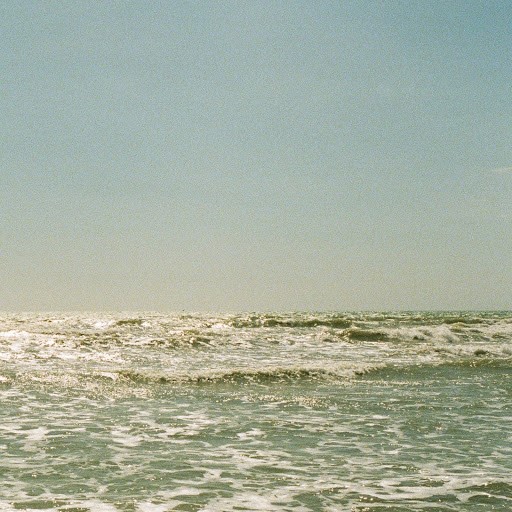 WATCH THE VIDEO HERE || STREAM ON ALL SERVICES HERE

Established in late 2014, IST IST have forged a formidable reputation on the back of uncompromisingly intense live shows and a fierce DIY work ethic. Releasing their debut album ‘Architecture’ in the midst of the pandemic on their own label Kind Violence Records, the LP found significant success in the indie, physical and vinyl charts.

Second album ‘The Art of Lying’ was released in November 2021, peaking at number 87 in the UK Top 100 and firmly establishing the band as one of the leading lights of a new era for music born in Manchester. The release was followed by a ten-date UK tour including sold out shows in Manchester, London and Bristol, as well as a string of sell-out European dates too. The band will release their much-anticipated third album, ‘Protagonists’ in 2023.

A compulsive, character-driven record from a band hitting their creative zenith, IST IST will release ‘Protagonists’ in Spring of 2023. Listen to the new single “Mary in the Black and White Room” now: 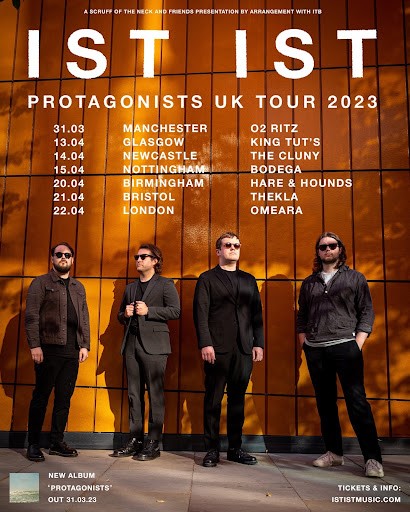