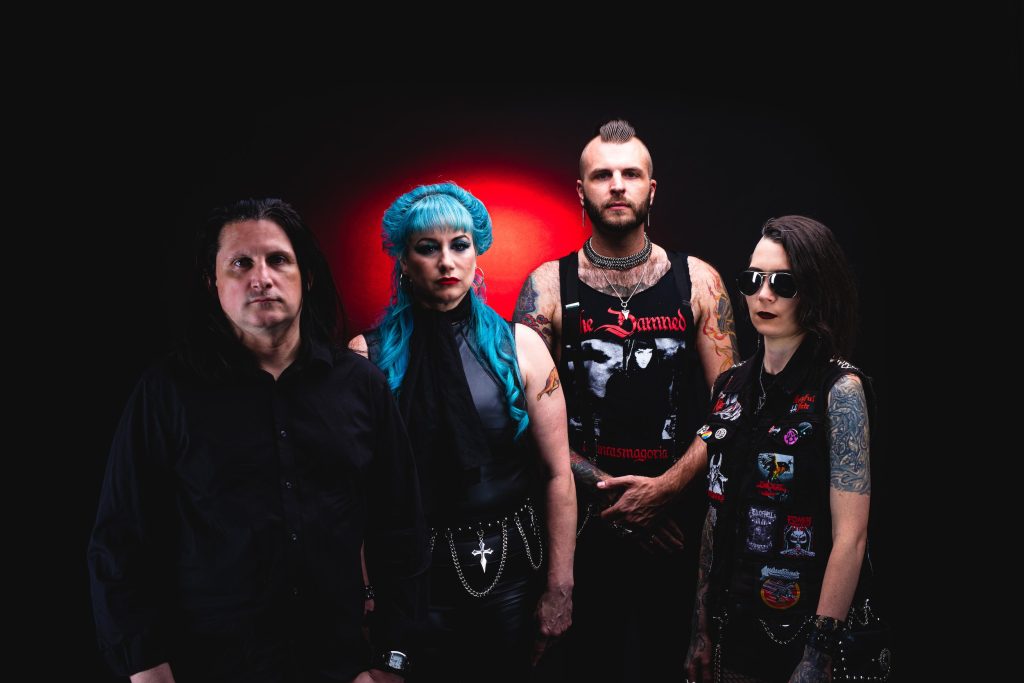 Incendiary new single from the reloaded Boston quartet hits the streams on September 27, with a Gene Dante-directed music video out NOW.

In the real world, things are often exactly how they seem. On social media, the opposite is nearly always true. And yet we play the game and endure the cycle: Post. Comment. Like. Share. Scroll. Lather. Rinse. Repeat.

By now, our social media habits are second-nature, and when we’re not busy arguing over the most trivial of things, we’re spending time building our own personal facade of how we want others to perceive our lives. But on “Skeleton Closet,” Gretchen Shae & The Middle Eight pull back the curtain on the lies that fuel social media and show a different scene on the other side of the screen. The Boston alt-rock and post-punk band’s adrenalized new single hit the streams on Tuesday, September 27, with its Gene Dante-directed music video premiering on YouTube on October 11. The band plays Notch Brewing in Brighton on October 27.

“‘Skeleton Closet’” is about the duality of social media: the public persona vs. the private,” Shae says. “We don’t want people to know we are unhappy, to see the unpleasantries, so we post a photo of some lavish object we bought, or of ourselves smiling with, perhaps, people we loathe. The idea of social media as a means to connect and share all emotions has really backfired, hasn’t it? Instead, we bury our secrets. We put filters on not just our faces; we put them on our lives. And we all do it, to some extent.”

When Shae offers up the opening lyrics of “It’s show and tell / Gather round / Take it all out / Don’t hide yourself,” she’s not only setting a thematic tone for the fiery track, which rages with a punk rock fury and a glossy ‘90s alternative sheen, but also welcoming us into a world where nothing is as it seems. And this is a world we’ve all welcomed with open arms, despite it constantly aligning against our best interests.

“The song came together in the summer of the pandemic,” Shae admits. “We were all stuck inside our homes. For many, social media was the only socializing permitted; thus, it became an extension of real life in a hypersensitive fashion. The uptick of posts was extraordinary. It is a basic human instinct to one to connect with others, to be approved of, to be loved. The song’s chorus ‘Living with secrets/they become your truth’ cautions the listener: beware the duality you project.” 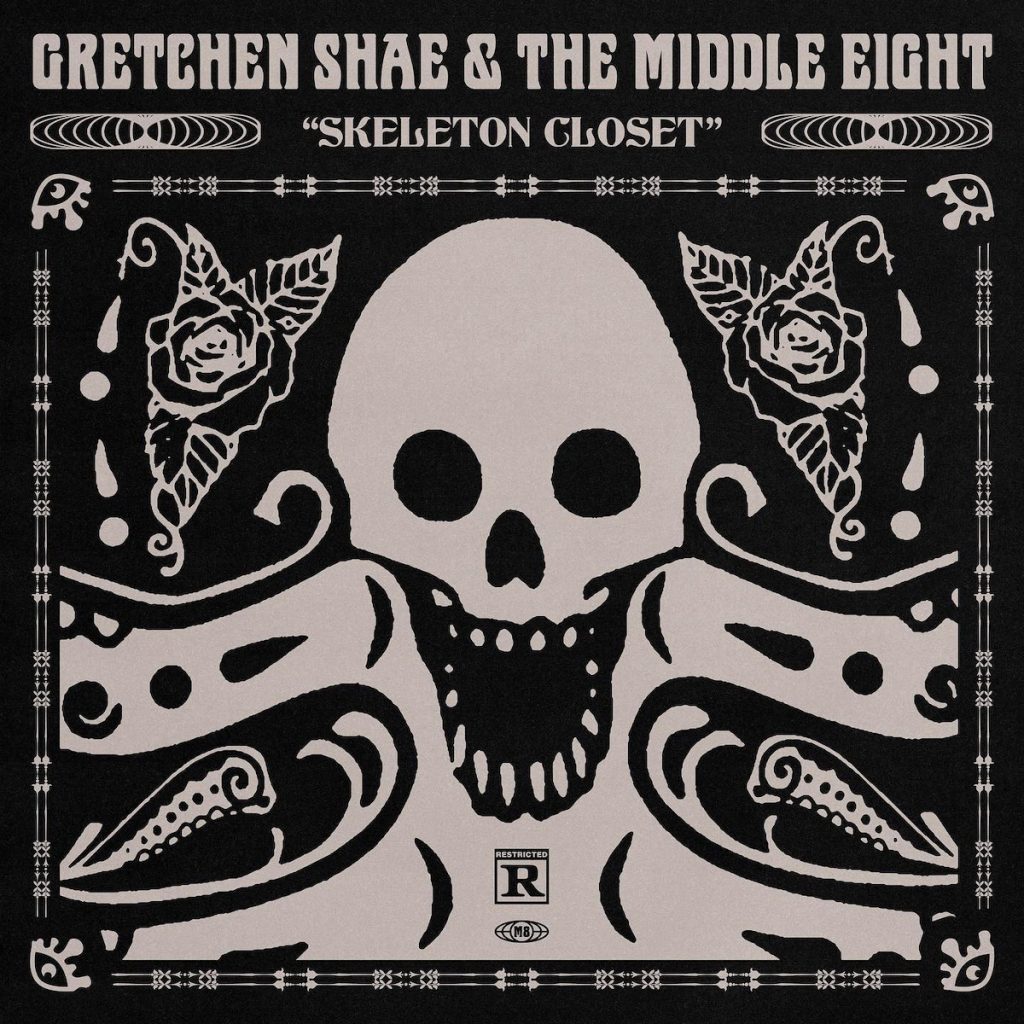 Following this summer’s Exit Fire EP, which collected the band’s first batch of singles, “Skeleton Closet” is the latest and loudest in Gretchen Shae’s Middle Eight arsenal, refueled and reloaded with a new lineup that features guitarist Ronan Fahy, bassist Killian Carcosa, and drummer Nick Mehos. “Skeleton Closet” kickstarts an exciting new chapter for Gretchen Shae & The Middle Eight, and appropriately enough, the incendiary track’s music video is set on the red carpet of a film premiere. But like all things surrounding this song and our social media-driven lives, what lurks under the surface – here, the band rocking out in black and white in skeletal suits, away from the glitz and the glamor of the bright neon lights – is at striking odds with what we see in front of us.

“For the ‘Skeleton Closet’ music video, I envisioned a simple concept: what we present vs. who we are inside,” says Dante. “A movie premiere encapsulates that perfectly. The red carpet situation is a perfect symbol of people presenting their most agreeable selves: Smiling, positive, triumphant; putting on their best faces. In contrast, the ‘movie’ segment is literally a high-contrast black and white study of the band rocking out – their true selves. The red carpet shots were kept tight to emulate pressure, with the band standing rigidly together. They move more freely when ‘allowed’ to play their instruments. The black and white segment is when they really cut loose and are free.” 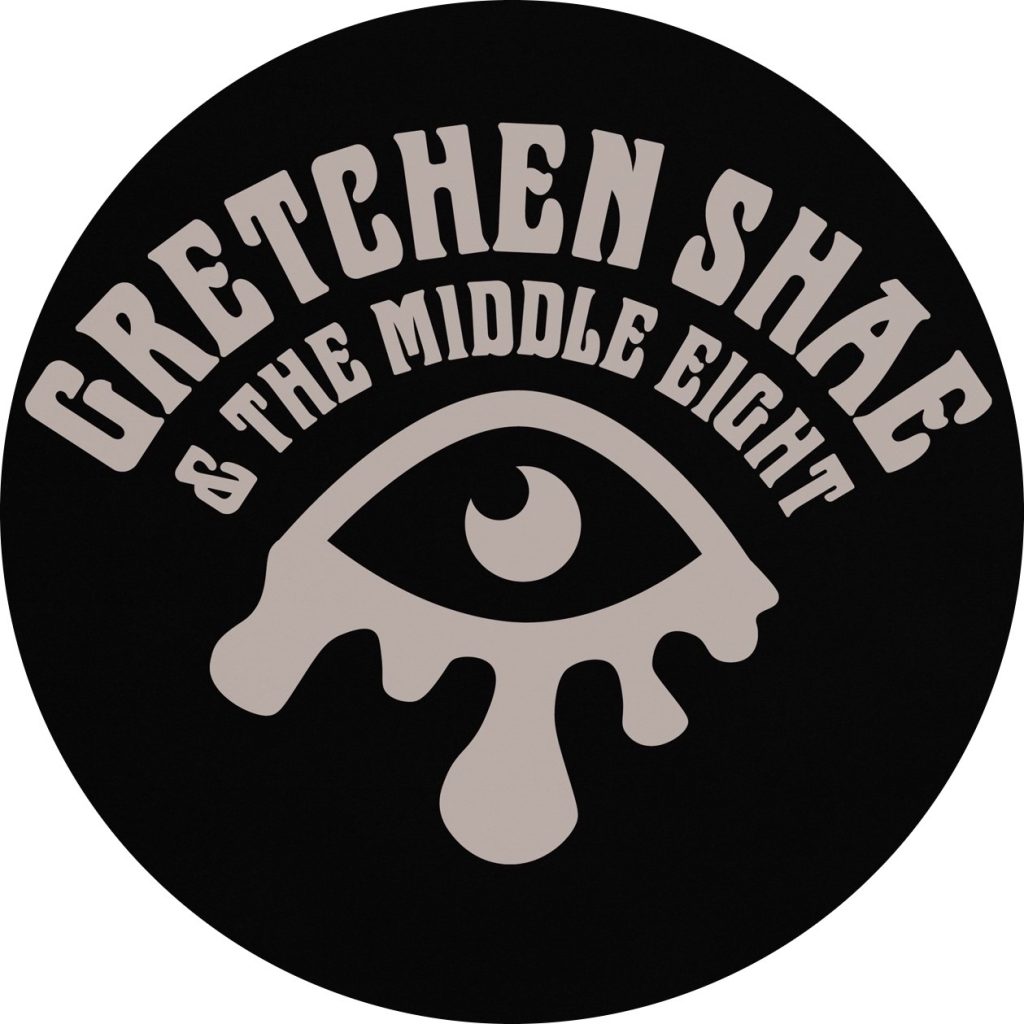 There’s newfound freedom within the real world of Gretchen Shae & The Middle Eight as well. The new lineup has sparked creativity and collaboration: Fahey and Carcosa play with Shae in their Siouxsie Sioux cover band Gretchen & The Banshees, and Mehos brings a visual component that gives the band’s music an animated and eye-catching aesthetic element. And the duality of the track shines through in its accompanying visuals. “wanted to create something that was in line with early-’90s Tim Burton playfulness on the surface while darker things lie beneath,” Mehos adds.

“This new line up is a new band in a multitude of ways,” Shae concludes. “Whenever you introduce existing songs to new players, they breathe their own life into the parts they play. We have taken a more post-punk turn on many of the songs we are working on. I love when everyone’s personality comes through on their instrument. This group brings a range of influences to the table; from metal to post-punk, from punk rock to shoegaze, our individual influences are reflected in our playing.”