Prelude To A Revolution – Regent 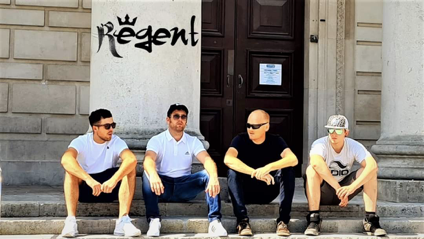 Following on from the BBC Introducing / Radio X supported “Dirty Little Sinner”, their latest release finds the Southampton band stripping away the raucous rock’n’roll of its predecessor to unveil something altogether more slow-burning and stately.

A song ultimately about heartache and loss, Rooke’s impassioned vocal is complimented by the majestic guitar work of Regent axeman in residence: Chris Woolf. Wrought from raw emotion and with tenderness ringing through every note, ‘Today’ brings to mind the soul-baring touchstones of Jeff Buckley, Chris Cornell or Richard Ashcroft.

Speaking about the track, Regent frontman Ben Rooke says: “I wanted to sit and write a song about heartache and the pain of losing someone. Whether it be a lover, mother, father, sister or a brother…. We all go through low times in our life, and in the middle of a pandemic, I wanted to create an anthemic track that everyone in pain can relate to..”

Bringing listeners bang up to date with where the band are now, the track was recorded only last month and stands as their most recent track full stop. Demonstrating a band in rude creative health and in prolific form, it’s another fine addition to the Regent canon and one that paves the way to their much anticipated debut album: ‘Just A Revolution’, slated for release in the Spring 2021.

Taking inspiration from the seminal songbooks of The Beatles and The Rolling Stones and the masterful melodies of their many Brit Pop acolytes, Regent revel in the works of those past masters and carry their mantle on to a new generation. With a string of accomplished singles to their name already, the four piece have received recent airplay across the globe with plays from BBC Introducing, Radio X, Amazing Radio, and even SiriusXM in America. Making waves across the blogosphere too, Ear Milk have praised Regent’s “authentic sound that could very well become the newest variation British rock n’ roll.”, whilst Gigslutz hyped: “Hallmarked with the swagger and sonics of 90s flag bearers like Ocean Colour Scene, Oasis and The Verve”.  Already taken to the hearts of their devoted local fanbase​, Regent​ ​are now well accustomed to sell-out shows in Southampton, with word quickly spreading to other corners of the UK and beyond too.