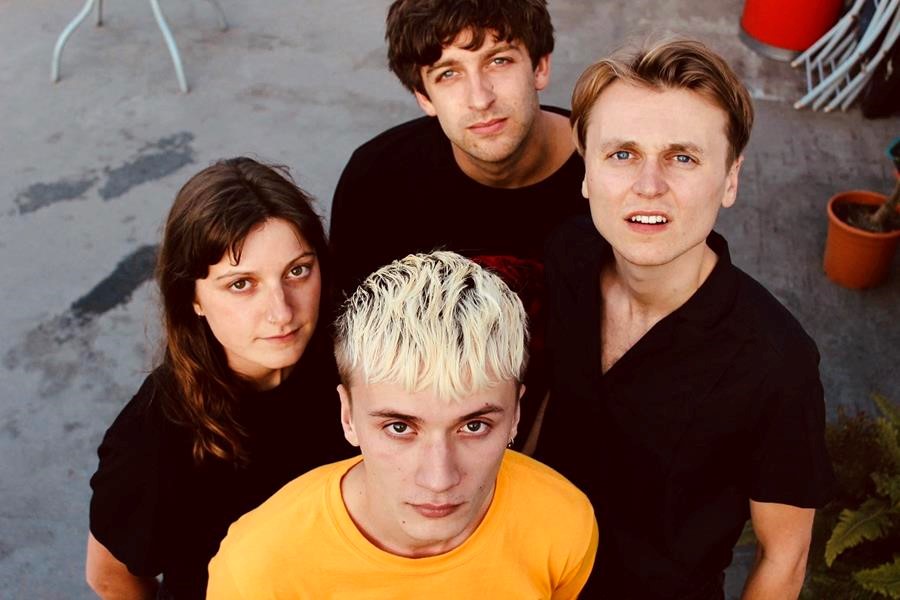 A lot can happen in a year. Flash back to the start of 2019 and London 4-piece Talk Show were just beginning to announce themselves as a name to watch with their (now sold-out) debut single for YALA! Records, “Fast and Loud.”

An intense, raucous outlay of post-punk energy, “Fast and Loud” raced its way through a jagged, dark account of an imagined metropolis, capturing the attention of BBC Radio 6 Music’s Steve Lamacq and BBC Radio 1’s Jack Saunders, as well as a host of tastemaker publications. Follow-up single “Ankle Deep (In A Warm Glass of Water)” then upped the stakes with a one-two punch that married their raw, punk-inspired delivery with melodic, romantic introspection.

Fast-forward to Jan 2020 and Talk Show have solidified themselves as a stirring live spectacle, touring throughout the UK and Europe in support of artists including Fontaines D.C., Squid, Fat White Family, Crows, The Murder Capital, Black Country New Road and Pip Blom. Now, they are ready to present the fruits of a year spent digesting the world around them. Their debut EP “These People” arrives on March 27th via Council Records, and today they are sharing its first single “Banshee.”

Lead vocalist and guitarist Harrison Swann says of the track; “At its core, Banshee is a frustrated lovelorn tale. We didn’t want Banshee to feel depressing or hopeless, more heartfelt and ardent. I wanted the lyrics and song to progress through a relationship which brings no resolution, nor closure for the protagonist. Focused on melodic guitar lines and the rhythm section supporting the lead vocal, it helped us to create an uplifting track with a melancholic undertone.”

More about These People

On an EP that lead singer and guitarist Harrison Swann says was “mostly written whilst on public transport” it deftly interprets a world in which throwaway culture is peppered with occasions of deeper meaning and importance. Swann even took lines from adverts and signs as inspiration while travelling around the city.Talk Show by their very nature deal in moments – from the fleeting, the everyday and the unremarkable, to the deep, significant and life-affirming – and so it follows that “These People” was designed to capture a moment in time. Studio sessions were kept pacey, lively and energetic, as a way to reflect the live experience.

Consequently, the nimble guitar work of Tom Holmes, the distinct emotional growl of Swann, and the clattering percussive march of rhythm section Chloe MacGregor and George Sullivan all coalesce to create a breathless, intense, hopeful and frustrated examination of modern living. Through the push and drive of tracks “Atomica” and “Petrolhead”, the lovelorn “Banshee”, and undoubted future-earworm “Stress”, “These People” pulls at tightened threads, shines a light into dark corners, under rocks, and finds a world – and people – worth fighting for. Love, adoration and frustration may be words that come to define “These People.”

In whatever way the EP hits home, “These People” opens the door to what will be a thrilling 2020.