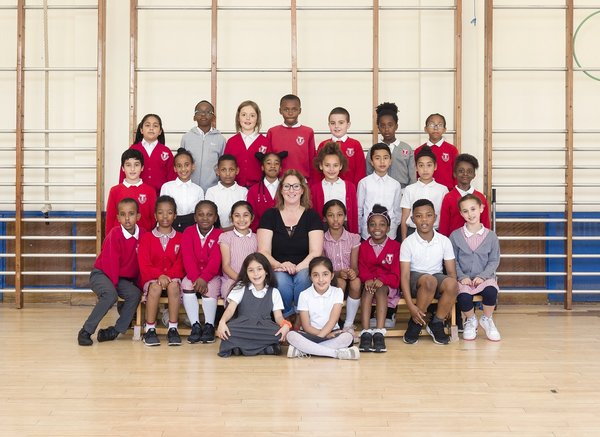 Explored through the vehicle of the traditional school class photograph, this vast new art work is one of the most ambitious portraits of children ever undertaken in the UK. It offers us a glimpse of the capital’s future, a hopeful portrait of a generation to come.

These class photos are brought together into a single large-scale installation, capturing tens of thousands of Year 3 pupils in a milestone year in their development.

There’s an urgency to reflect on who we are and our future […] to have a visual reflection on the people who make this city work. I think it’s important and in some ways urgent.
Steve McQueen

Running in parallel to the exhibition at Tate Britain, Artangel is staging an outdoor exhibition spanning London’s 33 boroughs, giving the public a glimpse of the future of their city.

The exhibition is free to visit, with families warmly welcomed.

Every afternoon from 14.15–17.45 during holidays and at weekends there will be large magnifiers operating in the Steve McQueen Year 3 exhibition, allowing photos at any height to be seen in greater detail. For more information ask a member of Tate staff, or visit the Information Desk.

Over the months ahead, pupils featured in the exhibition will be visiting Tate Britain with their schools. As part of this learning experience, pupils will see their photograph up close in dedicated learning spaces around the gallery and take part in activities that explore the exhibition themes. At the end of the exhibition each picture will be returned to the school where the photograph was taken.

For purposes of safeguarding the thousands of children in the exhibition, individual photographs are not named and Tate staff will not be able to identify individual classes or schools for general visitors. If you are a parent or carer of a child in the exhibition, we encourage you to contact your school who have been provided with the location of their photograph.

Steve McQueen Year 3 is a partnership between Tate, Artangel and A New Direction with collaboration from media partner BBC London and film partner Into Film.