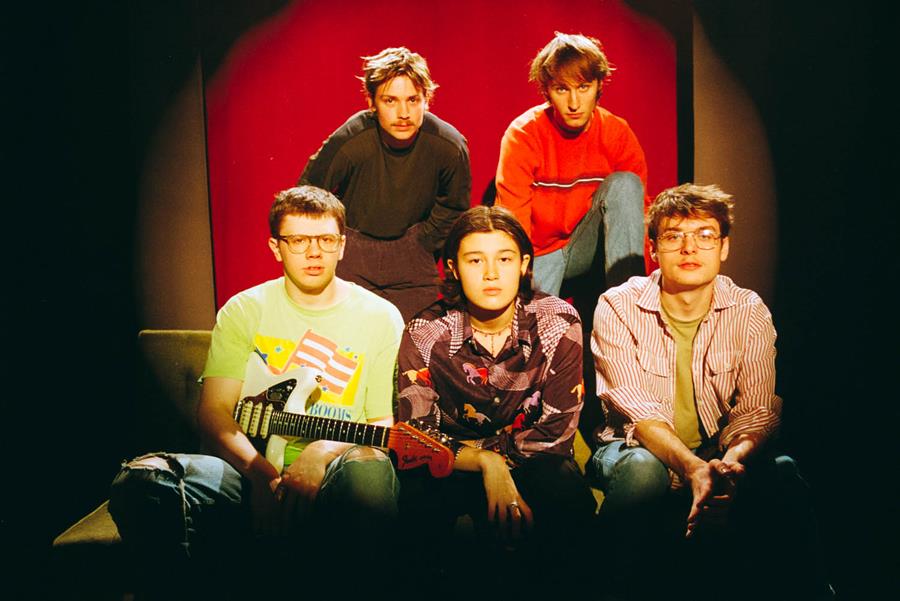 Now the band have officially signed to Saddle Creek, and announce their remarkable debut album Collector. Collector, like the band itself, is defined and tightly-contoured by the ties between its members. Raina Bock (bass/vocals) and Isaac deBroux-Slone (guitar/vocals) have known each other from infancy, growing up and into music together. Now in their early 20s and a five-piece, rounded out by (guitar/keys/vocals), Logan Severson (guitar/vocals), and Brendan Manley (drums), Disq have assembled a razor-sharp, teetering-on-the-edge-of-chaos melange of sounds, experiences, memories, and influences on their debut LP. Produced by Rob Schnapf (Beck, Elliot Smith, Kurt Vile), Collector is a set of songs largely pulled from each of the five members’ demo piles over the years. They’re organic representations of each moment in time, gathered together to tell a mixtape-story of growing up in 21st century America with your best friends.

To celebrate the album announcement, Disq share Collector’s album opener and lead single entitled “Daily Routine.” The hard-hitting track is a massive introduction to the record, encapsulating a fatigued modern nausea, as deBroux-Slone declares in an apathetic, tuneful groan “This is my daily routine/Spend my hours on a computer screen…I’m in prison but I think this place was built by me.” He’s backed by woozy guitars before the whole band crashes in like a panic attack, with tempo darting up and down throughout the song. “’Daily Routine’ is a song about an intense personal struggle,” Isaac deBroux-Slone explains. “In dark times, life can feel like a cycle that I’m trapped in, repeating over and over with no means of escape. It’s easy to fall into a void, thinking that everybody else has it all figured out, while losing sight of the fact that many others feel exactly the same way.”

Listen to “Daily Routine” now via The FADER | YouTube

Additionally, Disq announce a North American tour in April following SXSW, and will make their way to London next week to debut new material at Five Day Forecast. Having already opened for the likes of Shame, Girlpool, Jay Som and more, Disq’s live show is not to be missed. Tickets go on-sale Friday, January 10th, at 10 AM locally. Get your tickets HERE.

Collector ought to be taken literally—it is a place to explore and catalogue the Madison, Wisconsin band’s relationships to themselves, their pasts, and the world beyond the American Midwest as they careen from their teens into their 20s. This turbulence is backdropped by gnarled power pop, anxious post-punk, warm psych-folk, and hectic, formless, tongue-in-cheek indie rock. Having literally known eachother since almost the day they were born, Bock and deBroux-Slone started jamming in middle school (Bock vividly recalls being floored by deBroux-Slone covering  “Jesus of Suburbia” on the drums), and by high school they were playing in bands together. Through gigging around Madison, they met and befriended Connor, Severson and Manley—three equally dedicated and adventurous musicians committed to coaxing genre boundaries.

The fact of Disq’s origin in a mid-size Midwestern city is an inextricable thread in their story and sound. The insular nature and isolated geography of Wisconsin allowed for what Bock and deBroux-Slone describe as an incubator effect: unhindered by competition and explicitly capitalist practices that more populous music communities tend to foster and necessitate, Madison has allowed the group a supportive, pretenseless groundwork. “I love feeling like an underdog,” says Bock. “I’m super proud to have grown up in flyover country.”

Throughout Collector, the group displays a shrewd understanding of pop and rock structures and their corollaries, as well as a keen desire to dialogue with and upset them. These tendencies aren’t intentional; they just are. For Disq, these are unconscious pursuits, which makes Collector all the more remarkable: it is the sound of a group of young musicians learning who they are, excavating where they’re from, and wondering where to go next. As a decade and chapters in their lives end, Disq are just beginning.