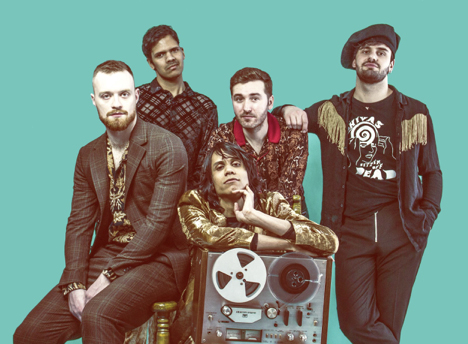 Barrelling through the doom and gloom of 2020 at a blistering 130bpm, London based New Wave outfit PHANTOM ISLE unveil their immensely danceable new single, ‘MAR V’ – out Wednesday 8th July.

Keyboard player, Joshua Pullen who took the lead with writing the music says: “The song started as a remix of our previous single ‘I Am Urs’ but became a very different beast when I was messing about with a new drum machine I bought. I was listening to a lot of Soulwax and Simian Mobile Disco at the time and loved how they would produce songs with a pounding single-note loop throughout.”

Despite its upbeat and energetic feel, there’s a dark side to ‘MAR V’. Lyricist and drummer, Sam Thorne explains: “The lyrics were actually written about feeling anxious and alone” comparing that feeling to an old friend that follows you through life, saying “you almost miss it when you leave it behind”. Singer and guitarist, Peter Marchant adds, “the song pretty much became the soundtrack of MaNo-Musikfestival in Marburg, Germany, where we headlined in March this year”. 2,000 fans jumped and danced frantically to MAR V’s hypnotic pulse at the festival’s closing show, seen in the single’s official video along with a montage of mischievous and surreal footage from the band’s journey so far. The band arrived in Marburg on March 5th (hence the romanised title, ‘MAR V’), they saw and conquered.